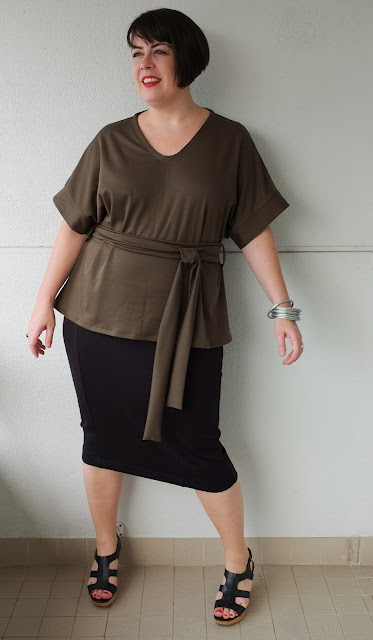 An all ponte outfit is pretty much the definition of secret pajamas, non? 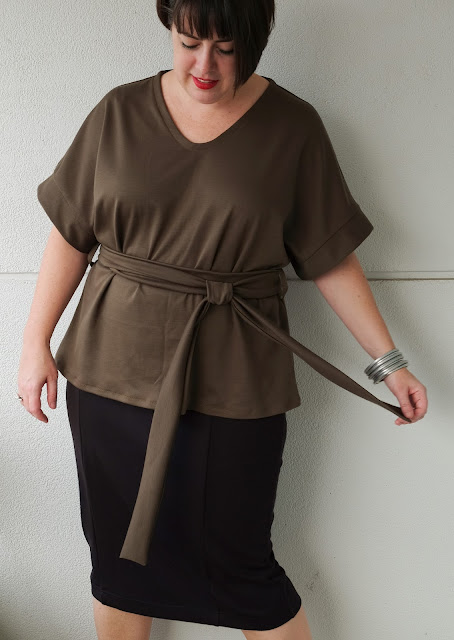 This is the Named Sointu Kimono Tee... it's a super simple pattern, but with many of my favorite features. I've had my eye on it for a while, but abstained until a) I saw a couple cute versions (the grey version by Erica at Handmade Wardrobe is so cute!) and b) it was on sale. Because I am cheap. 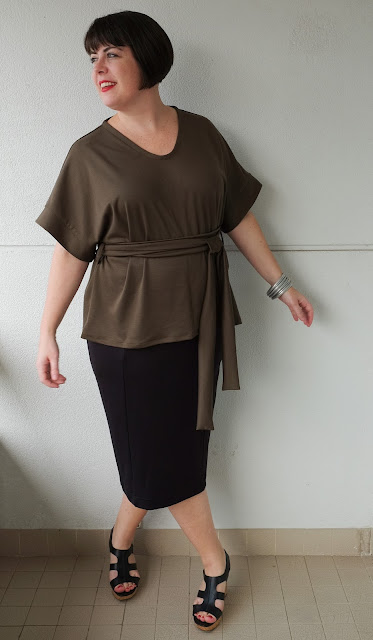 The Sointu pattern calls for a thick knit, like a ponte, but I think it would look nice in a thinner knit, too. There's also where the pattern has negative ease, so I think you could make it in a drapey woven, too, if you liked. 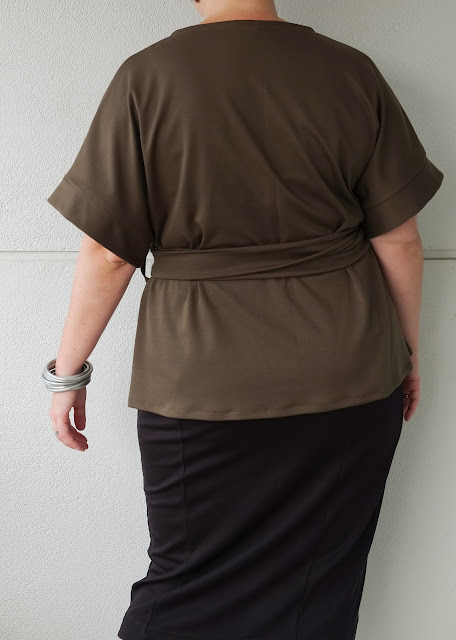 I went with some olive green ponte from my stash, while I still had my machines loaded up with green thread from my Adeline dress. I think I got the ponte at Imagine Gnats a couple years ago... it's super soft with a lovely sheen. It looks more brown in these photos, but it's an army green in real life. 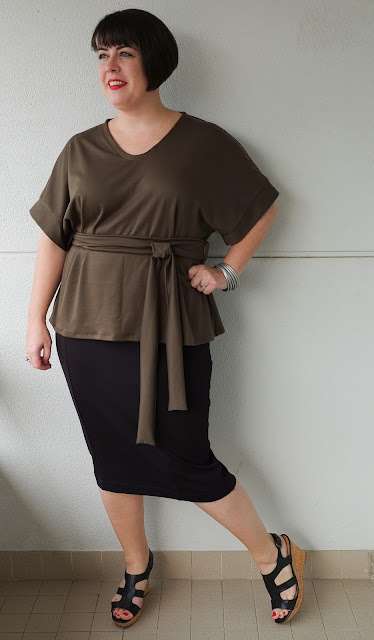 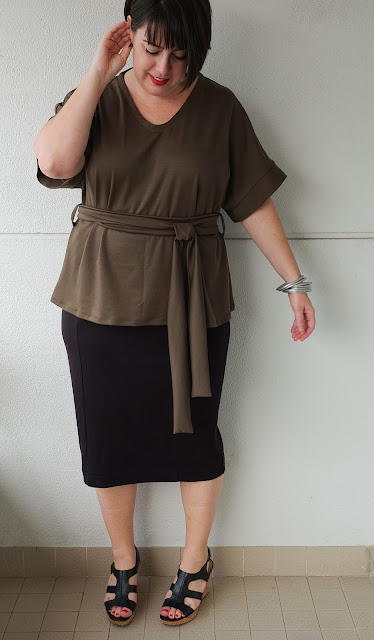 I raised the belt loops by about 1" after basting the top together and trying it on. The belt wanted to sit higher and was pulling the loops and the whole shirt upwards. 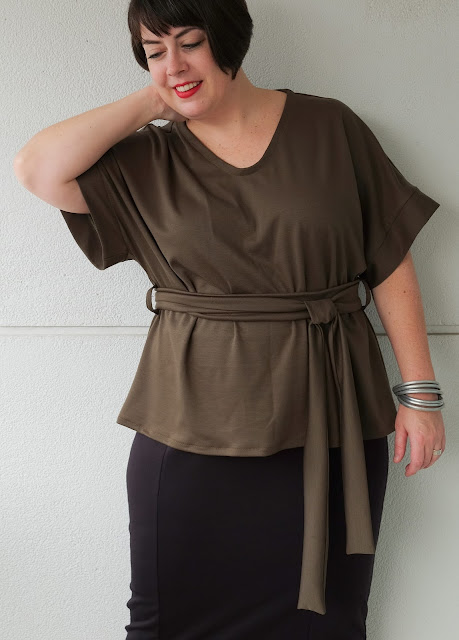 The neckline finish is a little bit weird, but it worked for the most part. They call it a bias tape facing, but cutting a knit on the bias seemed odd, so I just cut a selvage-to-selvage strip, with the stretch. Mine isn't sitting 100% flat at the bottom of the rounded v-neck: 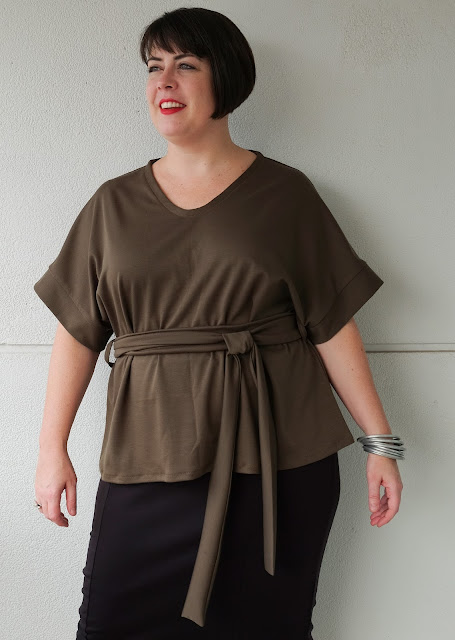 The belt/waist tie is very long! I wrapped it around twice and the ties still practically hang to my knees. The length makes it easier to tie a giant bow, though. Or, if you wanted to cut it shorter and save some fabric, you could. 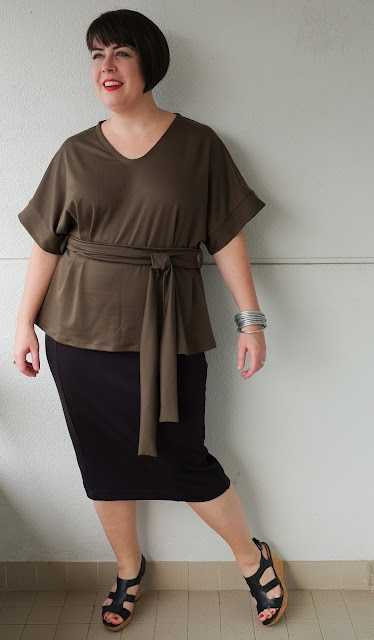 I like it! I think I might lower the neckline a bit next time, but that's my only gripe.
It's incredibly comfortable, and looks pretty slick paired with my Deer and Doe Brume skirt, methinks! 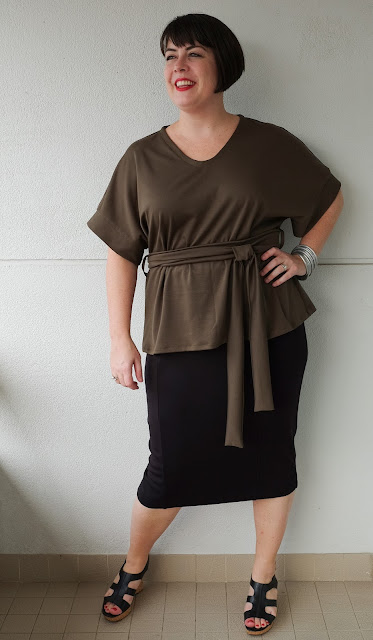