Have you been following along with #SewBibs, or maybe even joining in? I've been finding it so inspiring! 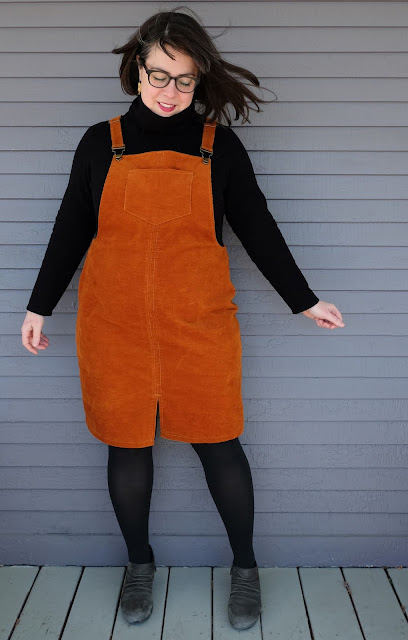 This is the Tilly and the Buttons Cleo Pinafore and Dungaree Dress, a super simple overalls jumper/dress with two hem and several pocket options. Super excited about this Sew Bibs project, and I'm having fun playing around with styling options! 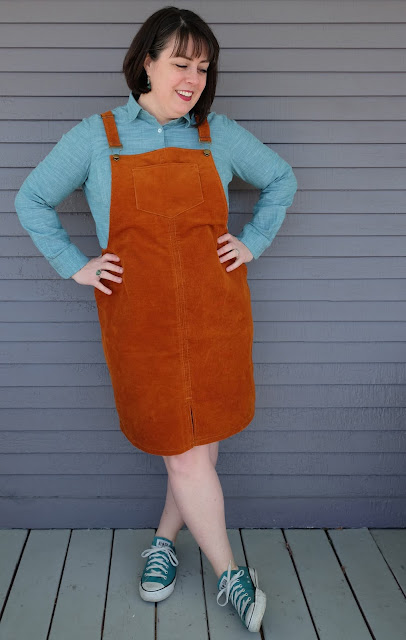 I've had the Cleo pattern in my stash for a couple of years now because I thought it was cute, but then couldn't decide if it was too cute for me. Like twee. But when we started Sew Bibs, I decided to move forward and give it a go! Why not? 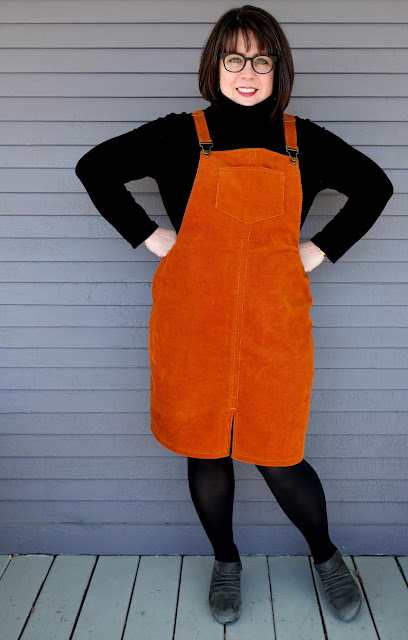 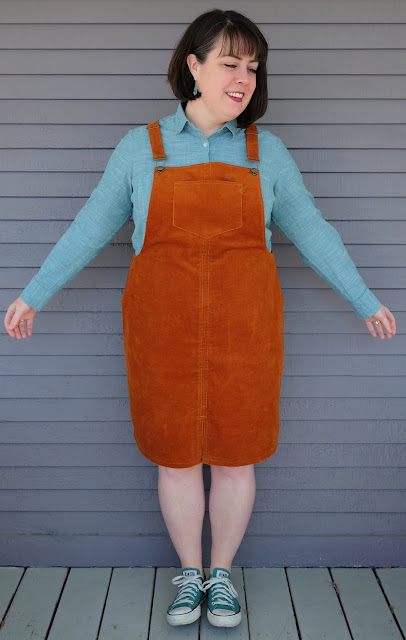 The Cleo is finished with facings on the inside, which stay put nicely since they're tacked into the seams. However, next time I might consider lining the whole thing so it slides more easily over the clothes I am wearing underneath. The corduroy is particularly sticky! 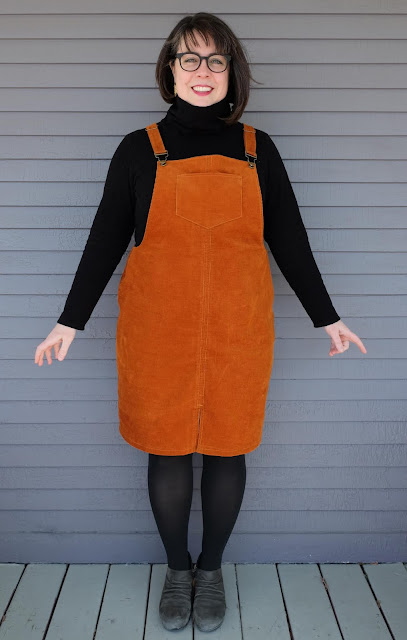 I chose the longer length with the split in the front. For pockets, I opted for the large center front chest pocket, and skipped the hip and bum pockets. 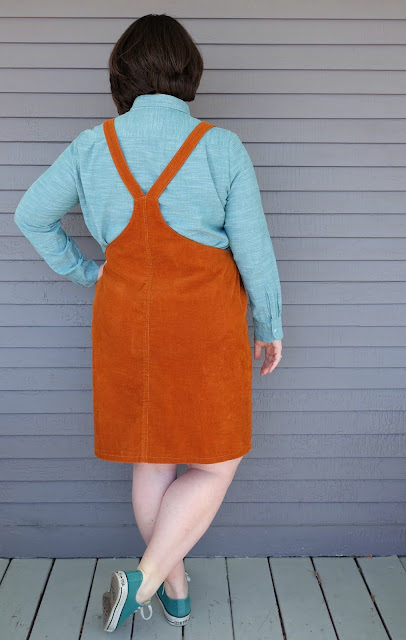 The fabric I chose for my Cleo is mid-weight corduroy that I bought at Osgood Textile last year. Osgood's is a fabulous fabric store near my hometown, Springfield, MA, where my mom still lives- definitely stop if you're ever through the area! The stuff in the store is better than what they seem to have online, I'd say. 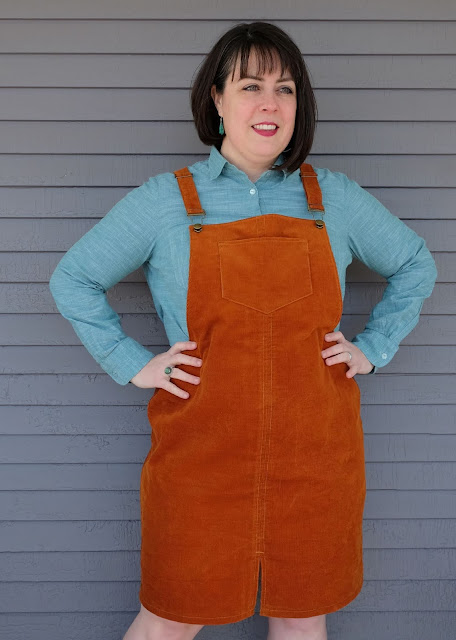 The mustard-y, tobacco-y, baby poop color of this fabric is fabulously '70s and a bit Wes Anderson-esque. I love it! Not a typical color for me, but a fun change-up. 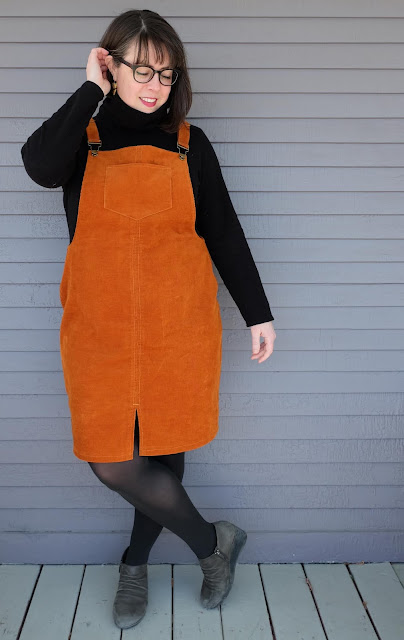 I decided that I wanted to use a bias tape finish on the inside seams, since there are so few of them. I had some floral bias tape in my stash from Daiso. The bias tape, which has orange/mustard, mint and teal, coordinated and lent itself to that '70s look! 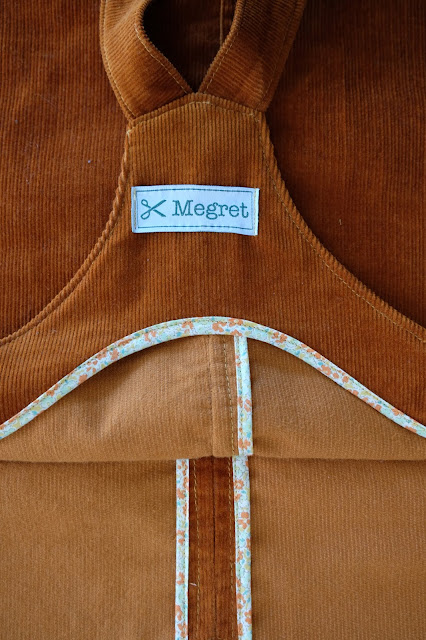 Some of the seams on the Cleo are pressed open, and others are sewn in a kind of faux flat fell. These techniques, combined with the bias binding I used on the seam allowances, make for a very nicely finished garment! 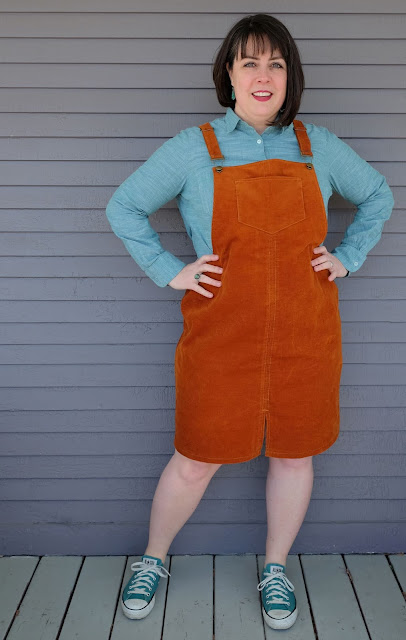 I did all of my topstitching with golden topstitching thread- the stuff I use for jeans. It's a bit hard to see since it sinks into the nap, but it works anyway. 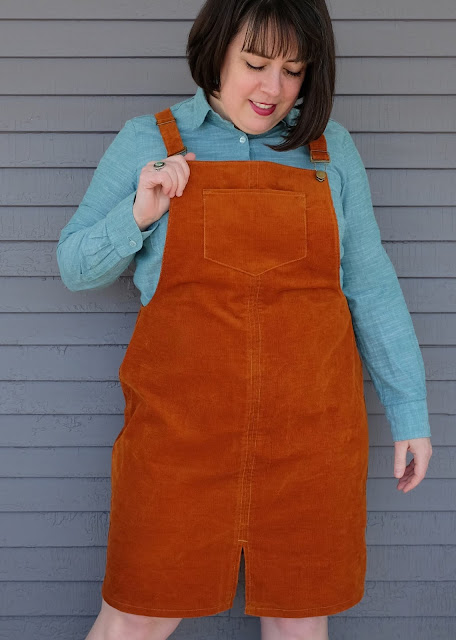 I took a cue from the bias tape and tried pairing my Cleo with a teal/blue shirt (my chambray Liesl + Co. Classic Shirt), figuring it was also a complementary color pairing for #SewHappyColor, too!

For a cozier look, I also layering my Cleo over my fleece Cashmerette Pembroke Tunic and tights... it is definitely more sleek and grown up this way! 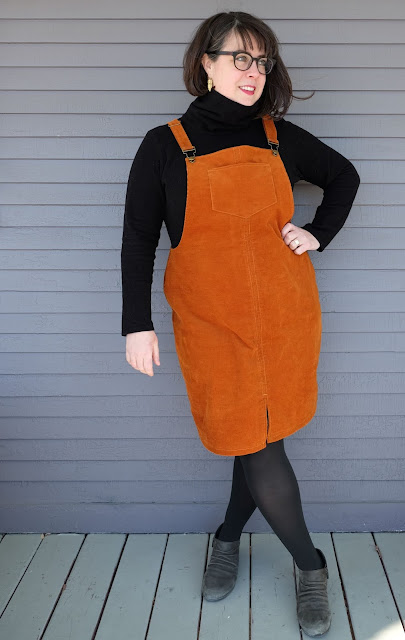 For hardware, I order some on Amazon (they came in a package of two, one silver set, one brass set). Tilly's instructions say to get 1.25-1.5" buckles. I initially ordered 1.5" and they were way too big for the straps, so I had to order more. The 1.25" worked fine, but I think I probably could have gotten away with 1". I guess I'll have to make more dungarees because now I have extra sets of clips! 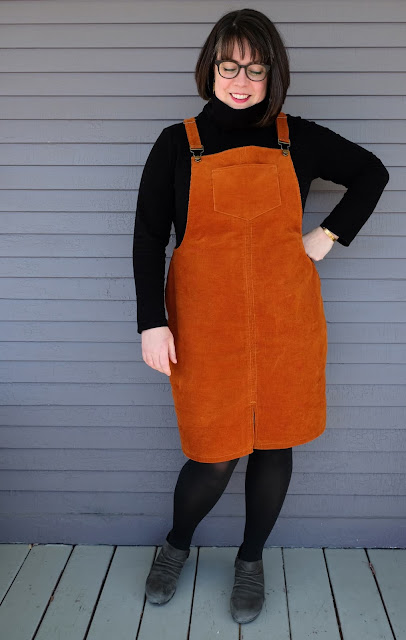 I'm really happy with this Cleo! It was a quick and satisfying project that can be made from a variety of fabrics. It would be a great project for a newer sewist interested in trying out some new techniques. I can see why there are so many Cleos out there on Instagram!
Posted by Meg at 6:51 AM