It's been a while since I've shared a new Toaster Sweater here! 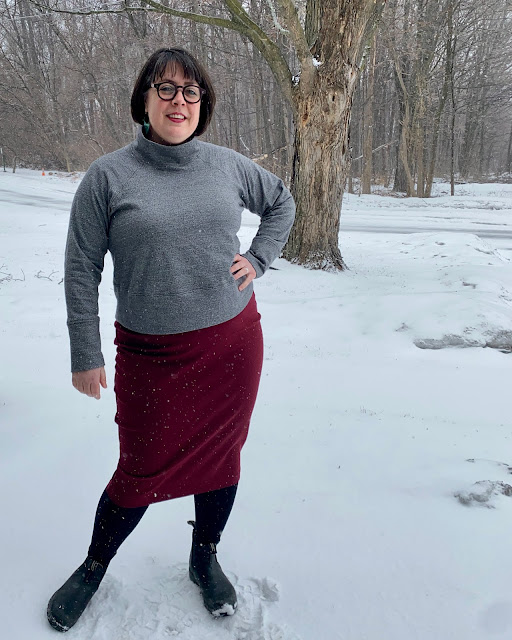 The Sew House Seven Toaster Sweater patterns have been a favorite of mine. I've made many versions for myself and family, and I even hosted a Toaster Sweater week where I sewed up all the different versions. 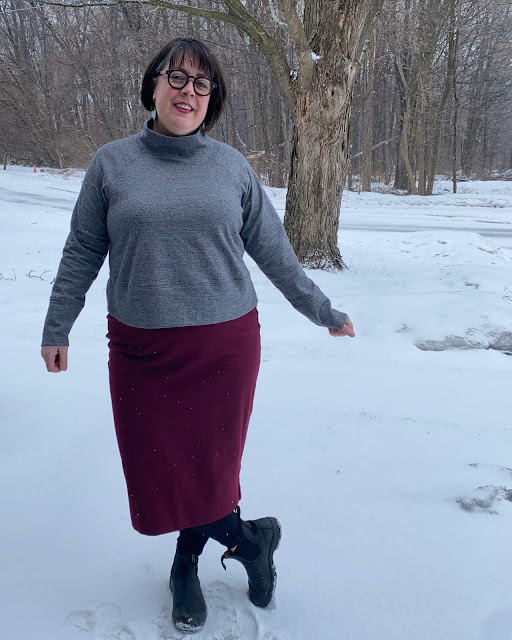 So I was pretty delighted to hear that Sew House Seven had made size range improvements to the two Toaster Sweater patterns. Now they go up to a 61.5" bust and 64" hip. Huzzah!

Sew House Seven also made other improvements to the patterns like reducing the seam allowances to 3/8" instead of 5/8" (better for knits), using numerical sizes instead of S-M-L, etc., and adding the "layers" feature to the PDF, which is great. And you can get the updated pattern from Sew House Seven if you previously purchased the pattern- just reach out! 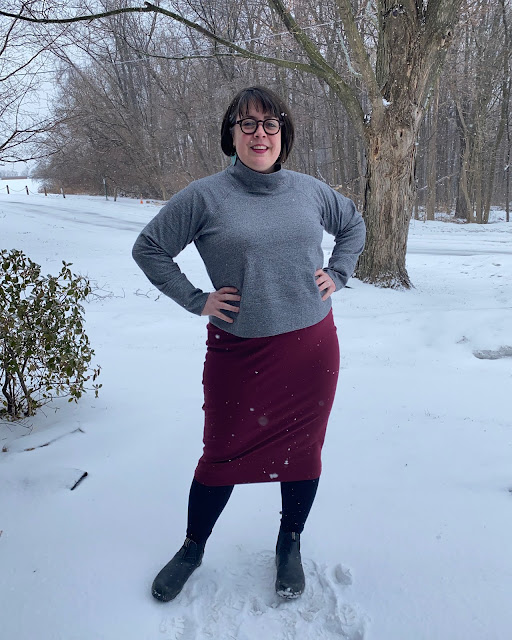 I wanted to try the new "curvy" size range because I thought it might work better for my current measurements (although I totally still wear all of my past Toasters!).

This is Toaster Sweater #1, which has raglan sleeves, a wide waistband, a loose turtleneck, long cuffs and falls between the high and low hip. I sewed a size 20 from the curvy range. 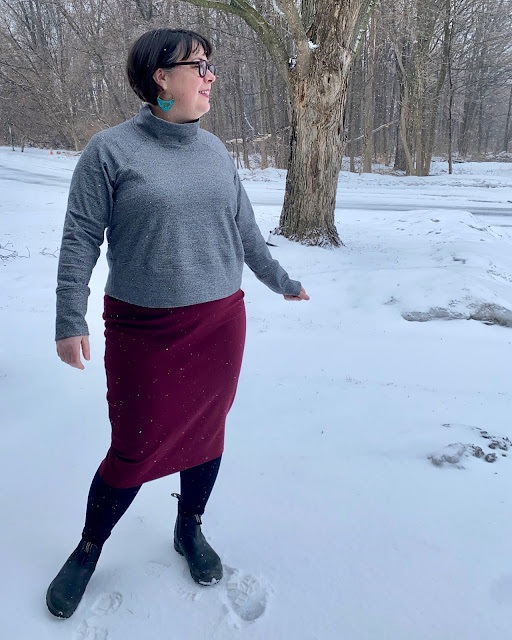 I definitely think I got an improved fit on the bust/on the raglan seam from my previous versions (here and here) where I sewed a size XL in the old version of the pattern. Previously I had a lot of extra fabric there that could be darted out. Now the raglan seam isn't as long and there is less bulk. 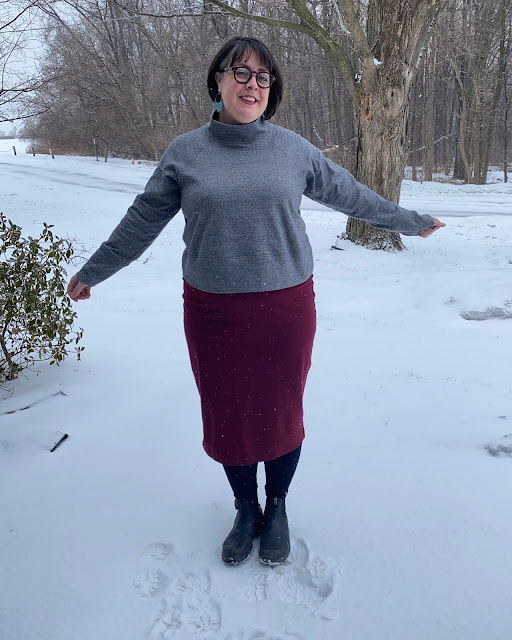 I found I didn't have to shorten the sleeves like I had to previously, which is great.

I am finding I have a bit of sleeve twisting, though. Not sure what's up with that. Looking back at my old posts I had it on the old Toaster, too. I'm going to do some research on what that means and how to fix it... this video looks promising! 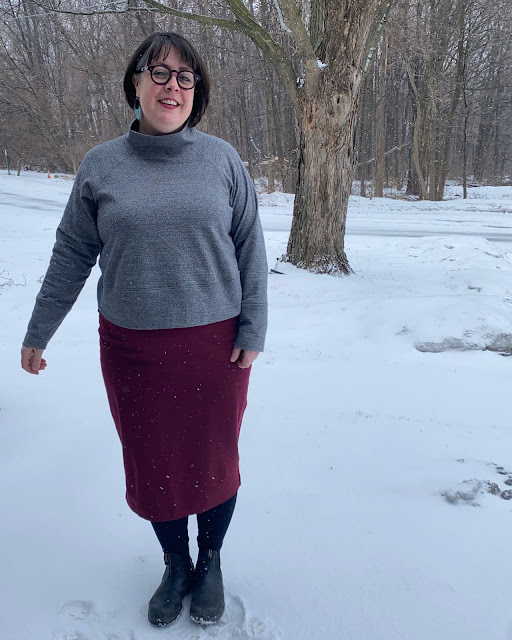 The fabric I used is a marled black and white heavyweight cotton knit. It feels like a double knit, but it's actually just a super thick single knit (which curls like crazy). I had purchased it in Bangkok years ago, and previously made my mom a Toaster sweater from the same fabric! I like the structure it gives to the Toaster Sweater #1 pattern. 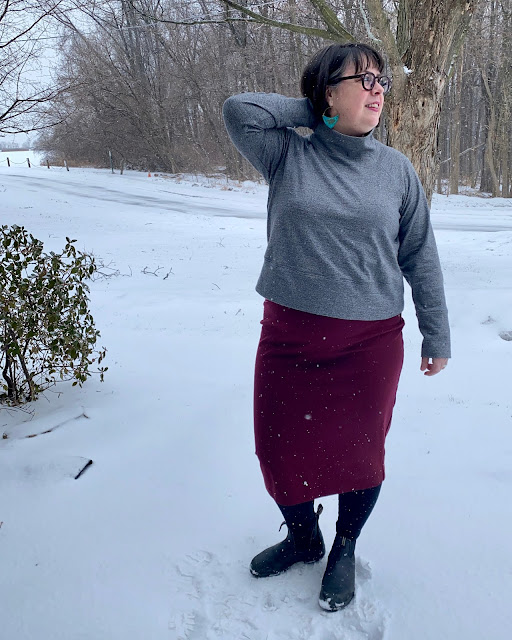 I paired my Toaster with another Sew House Seven pattern, the free (!) Elemental Skirt pattern -  you can read more about my Elemental Skirt here. Earrings are from local Vermont artist Soul Simone.

Looking forward to trying the curvy version of Toaster Sweater #2! 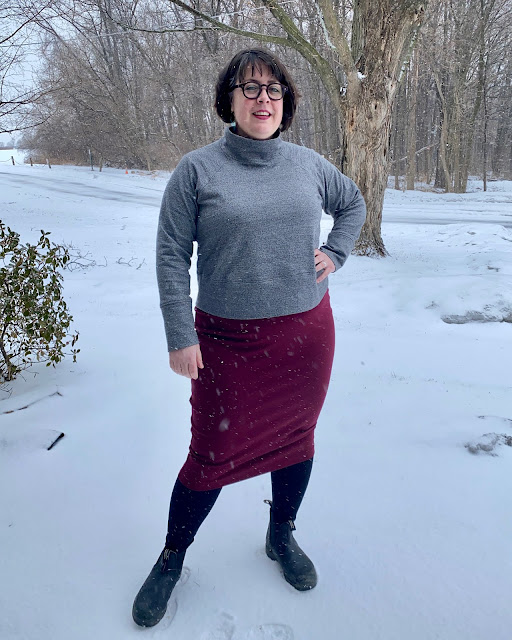