I made this spiced butternut and carrot stew for the mostly vegetarian EPA girls as a precursor to the recycled t-shirt necklace tutorial, and, judging by the clean plates, it seemed to be a hit (except with Jenny, who found it to be too spicy... sorry, Jenny!). I didn't find it to be particularly hot-spicy (I thought it was more spice-spicy), but it definitely warmed us up on a freezing night. 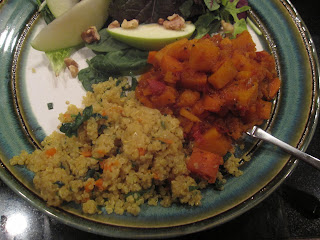 After looking at the comments on the recipe, I decided to double all the spices except the cayenne, added 1/2 teaspoon of cinnamon with the other spices, and used smoked paprika rather than Hungarian sweet paprika. Also, I added another 1/2-3/4 of a cup of water, as it was looking a little dry as it cooked. Finally, I didn't have any mint for the quinoa, so I added some parsley in addition to the cilantro.
I think that next time, maybe a little more quinoa would have been good, as we had no leftover quinoa, but a whole serving of the stew remaining. Also, the stew could probably benefit from some raisins or dried currants, and maybe some sliced almonds.
Posted by Meg at 10:31 AM