We had some folks over to watch the Super Bowl (followed by Glee's Thriller episode) last night... and by "some folks" I mean about 40 people. So there had to be a TON of food, particularly in the unhealthy and dip categories...

I went with some tried-and-true favorites:

But, I also tried a new recipe: chocolate-covered peanut butter and pretzel truffles. They were a BIG hit, especially for something that only has 3 ingredients... here's a shot of the inside, thanks to Chuck, who, along with Colleen, dug into dessert before they had even tried the dinner dishes: 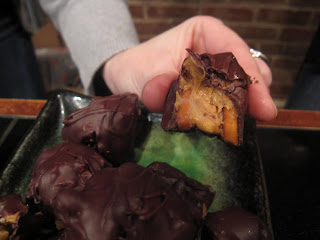 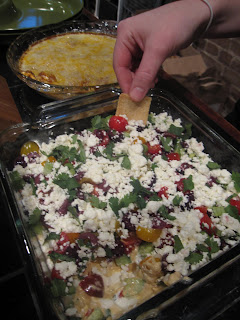 - Chuck made "Heart Attack on a Plate," which is a layer of cream cheese, covered with a layer of chili, topped with a thick layer of shredded cheddar, then heated until creamy and totally addictive: 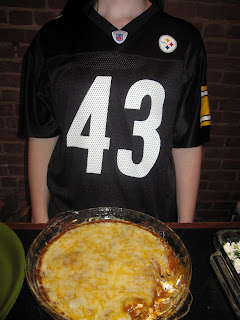 - Chuck also made a delicious traditional 7-layer dip, based on this Rachael Ray recipe. Forgot to take a photo in my cream cheese dip-induced coma.
Posted by Meg at 7:13 PM