This week saw some pretty low-brow, but quite tasty recipes grace our kitchen.  Sorry for the terrible low-light photos!

This recipe is embarrassingly easy, so easy that it almost doesn't require a recipe (but I got the idea from this website): pulled chicken made with pre-made BBQ sauce jazzed up with hot sauce, pineapple and onion, all melded together care of the slow cooker. I'm not normally a jarred BBQ sauce person, but we were the recipients of a bottle of Jack Daniels Spicy Original when Ben and Erin moved, and it's that bottle of sauce that sparked this idea. 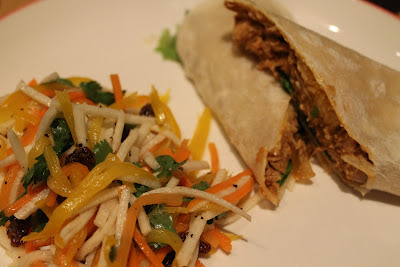 Place boneless (or bone-in if you're feeling sassy and don't mind picking out bones later) chicken breasts (would probably be even better with thighs) in slow cooker, cover with a roughly chopped onion and pineapple (you could use drained canned pineapple, but I used fresh because I live in the tropics and that's how we roll), top with BBQ sauce and hot sauce (I used Sriracha, tentu saja) to taste.  Turn on cooker, cook for 3-4 hours, shred chicken with 2 forks, cook for a little while longer so chicken soaks up sauce, eat.
We served the chicken in wraps with a little bit of lettuce and cheese, but you could put it in buns, too.

We also served it with a side of crunchy jicama and carrot slaw:  matchstick jicama and carrot mixed with raisins that had been soaking in lime juice, a squirt of hot sauce, a teeny bit of oil, chopped cilantro, salt and pepper... I also added matchstick yellow pepper, but would leave that out next time as it was too watery and its flavor was overpowering. 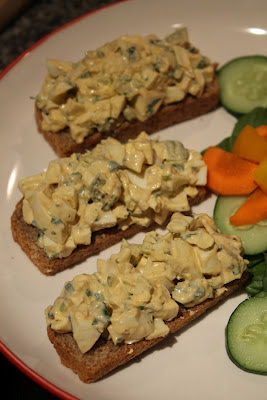 Egg salad made with a little bit of mayo, some Dijon mustard, adobo sauce (from a can of chipotle in adobo), minced green onions, minced dill pickles, chopped parsley and S&P.   Served on slices of homemade 100% whole wheat sandwich bread a la Artisan Bread in Five Minutes a Day. 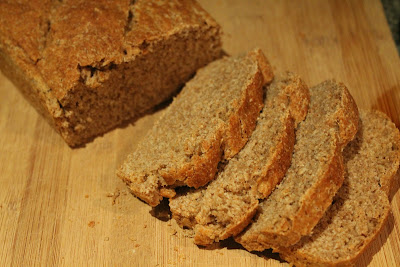