Tim and I saw some really pretty pink fruits at the grocery store last weekend... we had no idea what they were and the Indonesian label was not particularly elucidating for me (I only recognized two words- "merah," which means red and "biji," which means seed).  We thought perhaps they were some sort of round papaya, maybe?  We took a chance and bought them. 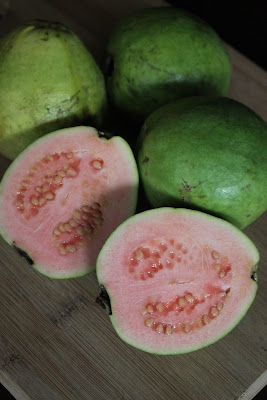 When I got home I did some googling and realized that we had purchased guavas.  Interesting.  My next question was: what the hell do I do with guavas?  More googling... guava paste!  Apparently guava paste is a big thing in the Caribbean, where its made into empanadas or paired with salty cheese. 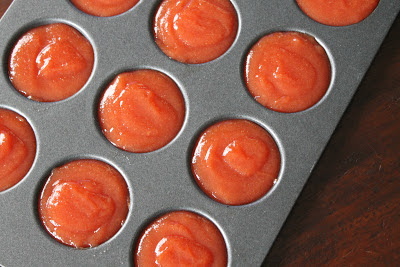 I made the paste based on these recipes I found and it was mostly successful- mine didn't seem to gel as much as it should have (perhaps it needed pectin to do so? maybe more cooking time?).  I tried to mold it in these shallow muffin top pans so that I would end up with little guava paste discs that I could cut into wedges, but ultimately it never hardened and stayed jam-like, so I put it in a jar and popped it in the fridge. 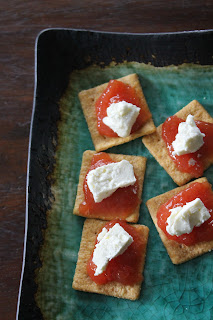 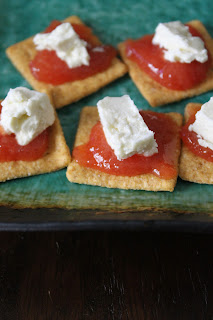 I spread it on crackers and topped it with a tiny square of feta cheese- awesome appetizer.  It also worked quite well on crackers with a smudge of cream cheese as well as on buttered toast.  Mmm. 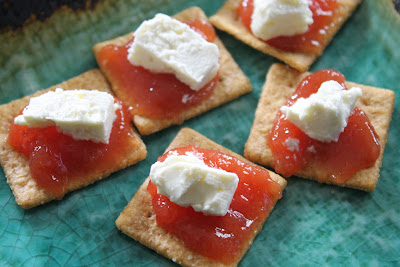 4 guavas made a lot of jam, so maybe my next step is a recipe with the guava paste... cheesecake? BBQ sauce?  Turnovers or some sort of pastry? Souffle?
Posted by Meg at 11:24 PM