Tim and I went to our favorite Indian restaurant last weekend for lunch.  We love the food there, but it's not somewhere we could feasibly go on a weekday, as we could be stuck in Jakarta traffic for 2 hours there and 2 hours back, possibly.  As such, I decided to also order some of my favorite dishes (chana masala and saag paneer) to go (dibungkus, which means wrapped up, a useful phrase to know) to eat later in the week. 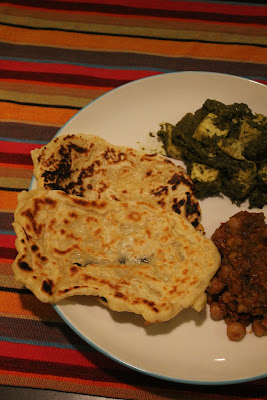 I was planning to make rice to accompany the leftovers, but honestly, we're a little sick of rice.  Naan it is, then!  I made this recipe from Aarti Sequeira, which is a simple stove-top version made in a cast iron pan and then brushed with butter at the end.  Pretty good! The dough is ridiculously sticky and I knew trying to use my rolling pin would be a disaster, so I shaped the loaves with my hands.  They're probably not as thin as they could be, but still quite awesome.
Posted by Meg at 8:48 PM