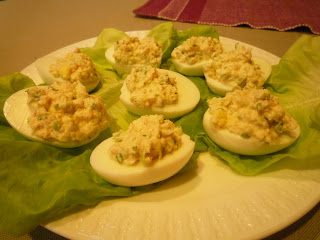 I was going to make lobster salad for dinner from leftovers from my THREE POUND b-day lobster...so I thought I would attempt an appetizer that went along with the seafood theme. I saw this recipe and it looked good. I left out the radishes after finding out that I couldn't really replace them with anything (thank you Meg) and I used langostino for the seafood portion of the recipe.
In the words of Calvin...BLECH! Martha liked them but they were icky in my opinion. Then again...I have texture issues. Not a fan of slimy items. The filling would be better on a cracker and not in an egg.
Posted by Andrea at 8:39 PM