I had the girls over for "TV Club," which is basically book club, but instead of reading a book every couple months and talking about it, we watch DVDs of shows from the premium channels that all of us are too cheap to buy. Last round we watched the first 2 seasons of True Blood, which is bloody and campy (and a little confusing if you've read the books), and now we're watching United States of Tara, which is pretty funny and thought-provoking. 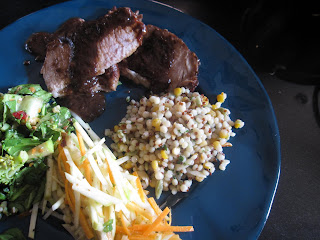 Today's meeting was over lunch. Roast pork loin in a rosemary, red wine and prune sauce was the main course. Yes, I know prunes have a bad rep... they even had to change their name to "dried plums" because everyone has such negative associations with prunes. But this recipe was really good! Earthy, rich, fruity, a little sweet... I pureed the sauce while the pork was resting, which I think was a nice touch. Served with Israeli couscous, kohlrabi/carrot/apple salad, and a green mixed salad, topped off with some totally addictive "puppy chow." Pretty tasty all around!
Posted by Meg at 10:59 PM