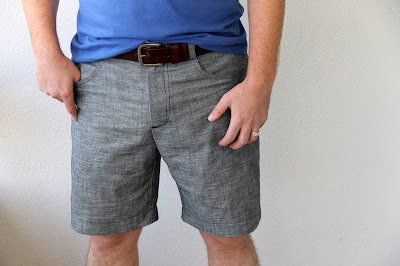 Shorts! Tim had a request for new shorts, which coincided with this year's Shorts on the Line competition/celebration over at Imagine Gnats and Kollabora. Kismet, I tell you. 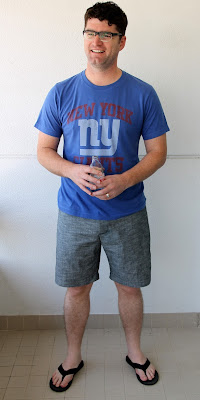 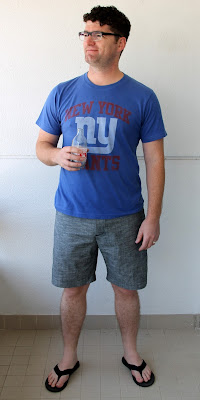 I made Tim a short version of Thread Theory's Jutland Pants, the more relaxed fit of their two men's pants patterns.  I treated this pair as sort of a wearable muslin, both because I wasn't sure how they would fit and I wasn't confident in my zip fly insertion skillz. 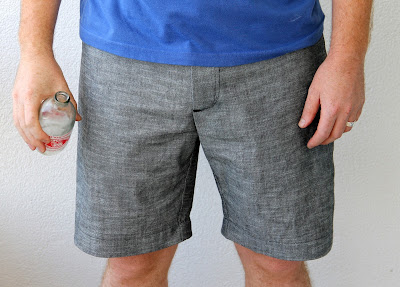 Overall, we're both pretty happy with the fit of the Jutlands! He wore them out the day I finished them, so that's good, right?  I'll definitely make a few little fitting tweaks next time, namely:

- Curve the back waistband a bit: it's quite straight, and since Tim has a butt, there is some gaping in the back.

- Use a smaller seam allowance for a few inches in the hip area right where the pockets attach to the side seams: there is a teeny bit of pulling right there, especially if he puts stuff in his pockets (which is inevitable). You can kinda see the pulling in some of the photos- horizontal pull lines.

- Fix a little bit of weirdness I have at the bottom of the fly: I don't know what I did, but there's something wrong where the fly facing/extension meets the crotch seam. You can't really tell when he's wearing them, but I know it's there!

- Finish/serge all of the crotch seams before installing the zipper, because when I tried to do it after the fact it was disaster.

Now that we know the Jutland fit is good, I may make him the pants, too! 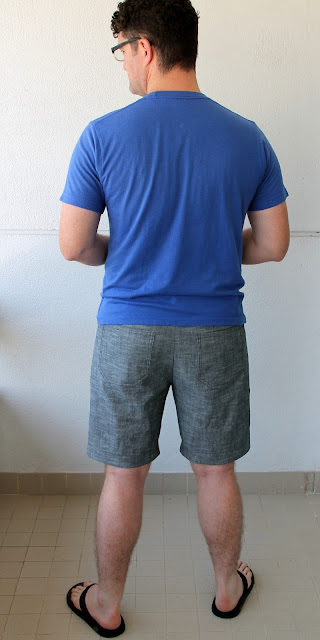 This time I opted for the patch pockets in the back for more casual shorts, but I am determined to try to make welt pockets at some point, particularly if I make him the Jutland pants. Maybe I should do some practice pockets on scrap fabric first, though. 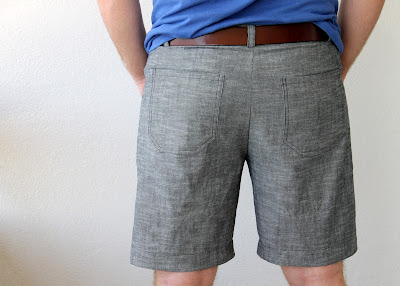 The fabric I used is some linen-y stuff I got in Hong Kong- I also used it for my Hollyburn skirt a few months ago. For the waistband facing and the pockets I used some cotton lawn scraps leftover from a Made by Rae Josephine blouse I made my mom (not yet blogged): 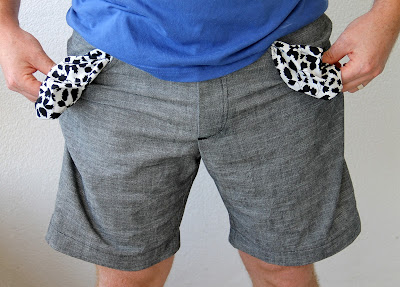 Have you made the Jutland pants, or any of the mens' patterns from Thread Theory? Planning on it?