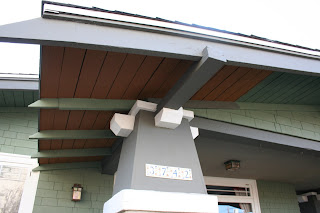 So... the San Diego kitchen remodel has launched a number of tangential projects , including building the new fence/gate at the end of the driveway and installing an on-demand, tankless water heater.

This week's offshoot was to change the color scheme of the house paint. "Autumn Bark" is now being applied to the roof eaves (after a failed attempt with "Sedona at Sunset" which resulted in what looked like a visit from the Great Pumpkin) and "Saguaro" has been added to the blocking at the tops of the shingle fields. Digging the pop of color, which matches the front door and new fence/gate color. 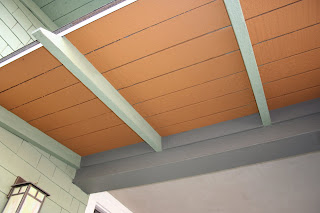 Also tackled this week was repairing the sprinkler line that runs along the side of the house. The line, which supports 10-12 sprinkler heads, was removed back during the foundation dig. The plants received lots of rain during January and February, but the sun is back out and supplementary water was in order.
The soundtrack to this week's projects was "Tonight" by Franz Ferdinand.
Posted by Jennifer at 8:25 PM