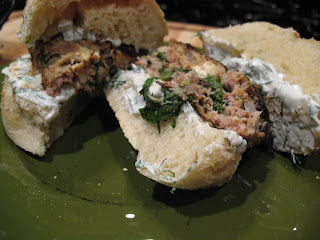 Mmm... this is the second time I've made these turkey burgers, very loosely based on Rachael Ray's Spanikopita burgers. Here's what I did (approximately, since I was throwing stuff in without measuring both times I made the burgers):

1 lb ground turkey
olive oil for sauteeing
some onion, chopped (about 1/2 C)
2 cloves of garlic
half a bag of baby spinach (you could use frozen spinach, too, if that's what you have- drain it)
1 egg
some dried oregano (1 tsp)
salt and pepper
handful of breadcrumbs (about 1/3 C)
1/2 C feta cheese, crumbled
1/3 cup kalamata olives, finely chopped

- sautee the onions in olive oil until soft, add garlic after a few minutes
- throw in spinach, sautee until wilted, turn off heat
- put turkey in a large bowl
- throw everything else in with the turkey, mix with your hands
- form into 4 large burgers
- sautee the burgers in a teeny bit of olive oil (Rachael said 5 minutes per side, but mine took a lot longer for some reason)

Serve on toasted buns with a greek yogurt sauce. For my yogurt sauce, I combined the yogurt with salt and pepper, some fresh lemon juice, and dill and mint from the Aerogarden. I made homemade buns/rolls with the dough I had sitting in the fridge.
Posted by Meg at 12:28 PM