Alton Brown's "Burger of the Gods"

Tim had his boys over to barbecue and watch the Final Four last night, and he went all out... no package of frozen Costco hamburgers for this fellow. He had seen Alton Brown make his "Burger of the Gods" on TV and decided this was his chance to give it a try. 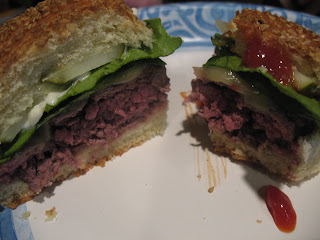 Alton's recipe skips the pre-ground meat in favor of grinding your own chuck and sirloin in the food processor... an extra step, but it was totally worth it. These burgers were awesome. Try them. Sorry this photo doesn't do them justice... I took it about 5 beers in.
Posted by Meg at 9:46 PM