So, the internets are all atwitter about the tasty baked goods from Momofuku Milk Bar in NYC, particularly their Crack pie (no, not named for a particularly craggy appearance or anything, but because it's addictive like crack). The LA Times had an article about the Crack Pie and posted a recipe, and since then, many a blogger has tried their hand at manufacturing this crack in pie form. 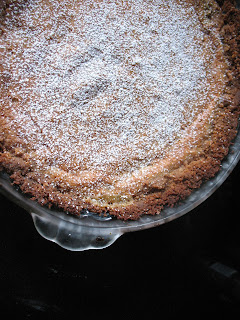 The recipe has several steps, but none of them are particularly difficult. Basically you bake a giant oatmeal cookie, then crumble it with sugar, butter and salt to make the tasty crust, and finally fill it with a ton of sin (melted butter, egg yolks, brown and white sugar, and some vanilla) and bake. 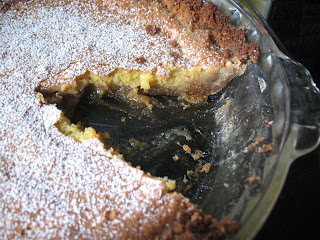 The end result is a gooey, sweet, salty, delicious mess. I brought it to a BBQ and it was gone in seconds as people basically inhaled it straight from the pie plate. It was like hyenas fighting over freshly killed wildebeest or something.

The recipe makes 2 pies- I did one in a pie plate and the other in a removable bottom tart pan. The tart pan made it a little easier to get the slices out.
Posted by Meg at 5:22 PM