A couple weeks ago, both Smitten Kitchen and The Minimalist posted recipes for a Spanish-style spinach and chickpea dish with smoked paprika (which is AWESOME... get some if you don't already have it)... both recipes were seriously drool-inducing, so I put them on my to-do list.
The Smitten Kitchen recipe won out this past Monday night, but only because it didn't involve a trip to the grocery store (which, in my case, usually involves waiting in line for a minimum of 20 minutes while the person in front of me vehemently argues with the cashier about god-knows-what). 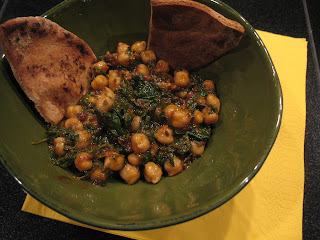 Deb's was the meatless version of the two recipes, as Mark Bittman's involved Spanish chorizo. However, you didn't miss the meat in her recipe- somehow her ingredients and method gave the impression that the chickpeas and spinach were cooked in a deliciously meaty sauce. I'm curious to try Mark Bittman's version, too, for comparison. I'm sure his is equally delicious.
Anyway, this recipe was really tasty. You could serve it as an appetizer on little toasts, or, as we did, as a main dish, along with a green salad on the side.
Posted by Meg at 11:32 AM