I wasn't sure what I could do with half a cup of canned pumpkin leftover from my pumpkin and white chocolate bars, but this recipe sounded too good not to try: pumpkin mousse with maple creme fraiche. 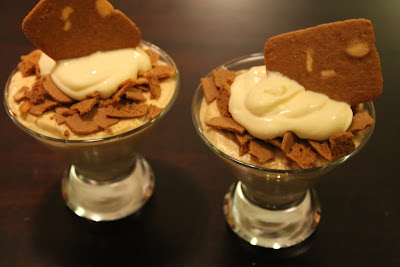 While not particularly difficult, you should probably get your whisking arm and several bowls ready, as the mousse has 3 different ingredients that get a thorough whisking: egg yolks, egg whites, and cream. 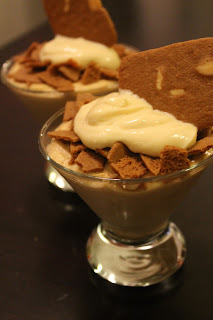 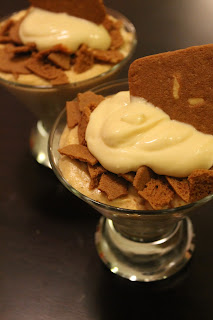 The recipe was quite tasty- the maple creme fraiche (which is like a super thick sour cream to me) was the kicker- so good!  Without it I think the mousse may have been a little bland despite all the spices, but together they were great.  I didn't make the gingersnaps as directed in the recipe, but instead crumbled some butter/almond cookies on top.  Also, I made a half recipe and was able to fill 3 dessert glasses with it (luckily, because I dropped one of them and still had two left for me and Tim!), so I think you could get six desserts out of the full recipe.