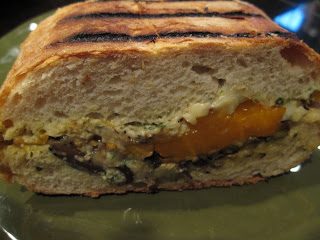 Got a mixture of different types of eggplant from the CSA this week and was craving something cheesy and melty. Eggplant panini it was!
My first attempt was somewhat of a FAIL, as I cut the bread (a cheapie ciabatta from the Giant bakery... Columbia Heights needs a legit bread bakery like crazy... I heard rumors of one thinking of opening in the area, but it's not set in stone by any means) horizontally rather than vertically, and it was waaaaay too fat... too big to fit in one's mouth (that's what she said!). The second time I cut vertical slices from the bread and it was much easier to manage. 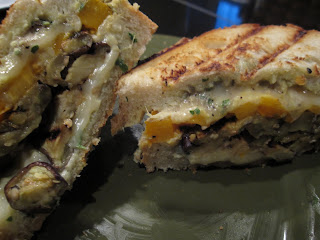 The artichoke/caper/parsley spread was awesome, though. Hearty, a little salty, fresh, a hint of creaminess from the mayo. Based on this recipe, but with the addition of fresh parsley to brighten it up.
The eggplant was sliced thinly, salted for 20 minutes or so, then grilled. Thrown on the bread with some yellow heirloom tomato, the artichoke spread, grated mozzarella, squished and grilled.
Posted by Meg at 11:29 AM