I saw this recipe for summer squash carpaccio in my Food Network Magazine this week and thought I'd give it a try as an appetizer. It is a cute idea and I had all of the ingredients in the fridge. It was also really fresh and super easy (i.e. no cooking involved, just slicing and layering). Mine isn't as pretty as the magazine photo (check out the link to see their photo), but they never are. 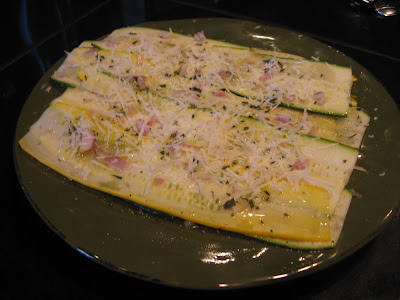 The recipe definitely requires a mandoline (not to be confused with the mandolin) in order to get the squash sliced super thin. Even with the mandoline, the slicing was somewhat inconsistent, but that's probably user error. Also, because they wanted the squash sliced lengthwise, I couldn't get the little handguard to grip the squash, so I was forced to risk severe laceration and/or finger loss by going at it bare handed. Glad to report that the kitchen is major injury-free (well, human injury free... there's still that little problem with my laptop and half a can of coconut milk).

The recipe's pretty healthy, although, as I admitted to Chuck, I layered a little bit of the cheese between every layer, rather than just on top... I like cheese. As far as the herbs, I mixed rosemary from the roof with some summer savory that I got in my CSA. Randy and Chris from Star Hollow Farm describes summer savory as a cross between thyme and mint. It has a really nice smell to it.

UPDATE: The Slow Cook (a gardening and food blogger), who lives a few blocks from us in Columbia Heights has his own version of squash carpaccio that involves goat cheese... check it out!
Posted by Meg at 9:10 AM