I saw this recipe for chocolate strawberry shortcakes in my Food Network Magazine (which I got for free, using my Coke points), and it caught my eye. Luckily, I got really great strawberries in this week's CSA. They were super ripe and needed to be used immediately, so I got a chance to try out this recipe... 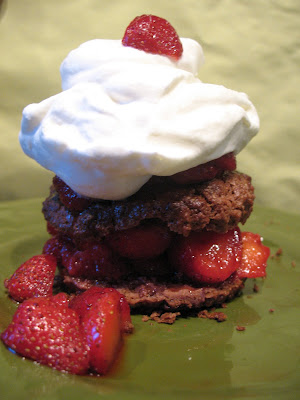 The shortcakes had a nice flavor, but were kinda dry. Maybe that's how shortcake is supposed to be... but I think I'd just make brownies and top them with strawberries and whipped cream instead next time.
Posted by Meg at 1:35 PM 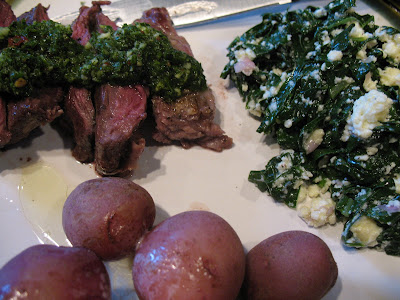 Bittman's recipe doesn't call for fresh oregano, but a quick Google search showed that lots of other recipes do, so I used a mix of half oregano, half parsely. I also added a splash of red wine vinegar in addition to the lemon juice, as called for in this recipe. I "eyeballed" the whole thing- I don't think precise measurement is necessary here.

Served with new red potatoes cooked in salt and this salad, which is barely blanched kale mixed with ricotta and a lemon-shallot dressing (we were afraid of the raw kale, hence the blanching).
Posted by Meg at 1:24 PM

French toast made with homemade challah, using Ina's recipe (minus the orange zest because I didn't have an orange) = deliciously custardy. 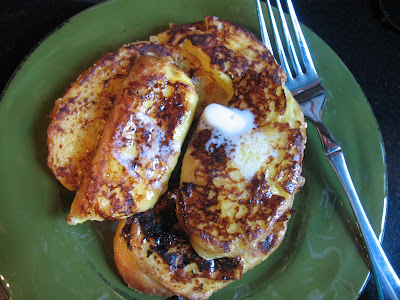 In-season, local strawberries from the CSA, a past-its-prime banana that had traveled from home to my office and back, plus some Greek yogurt and honey. 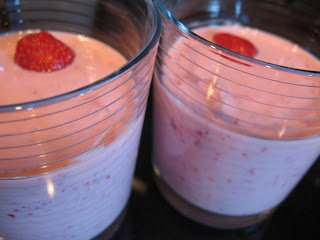 I forgot to get a photo of this with the salad, to give it some color. A little monochromatic, but delicious nonetheless. 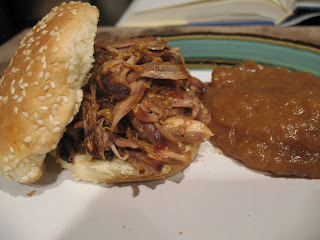 The pork is based on a recipe Mom gave me (see below)... slow cooked overnight then topped with sauce and slapped on a bun. I meant to make challah buns using the recipe from Artisan Bread in 5 Minutes A Day, but it somehow failed to occur to me that it was going to be hard to bake bread and pork in the oven at the same time. So Chuck just bought regular hamburger buns, which were totally fine.

Chuck made the applesauce based on this recipe with the collection of random apples we were amassing in the fridge from various weeks of CSA, combined with rhubarb, also from the CSA. The rhubarb gives the applesauce a nice tart kick.

Rub (makes a huge amount, but you can save it for later):

Mix all ingredients by hand.

1 boneless pork butt (approx 4 lbs) for 8 sandwiches (you can use one with a bone in it, too- the pork falls off the bone when it's done cooking)

Rub pork butt with 1/2 cup of the rub.
Marinate in the refrigerator overnight.
In a Dutch oven, with a small amount of oil, sear outside of the butt.
Put in the Dutch oven, covered, and bake at 275 degrees for 7 to 8 hours, or until tender.
Let cool for 20-30 minutes, then pull meat apart with two forks.
Toss with barbecue sauce, or serve with sauce on the side. 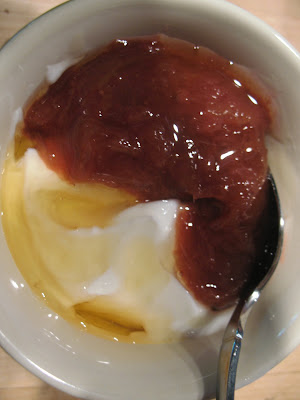 Chuckie lent a hand and made this simple rhubarb ginger compote, which we served for dessert over a bit of Greek yogurt. The compote is not super sweet, so we squirted some honey on top, too. A nice combination! I bet nuts or granola would also be nice with this.
Posted by Meg at 9:56 PM 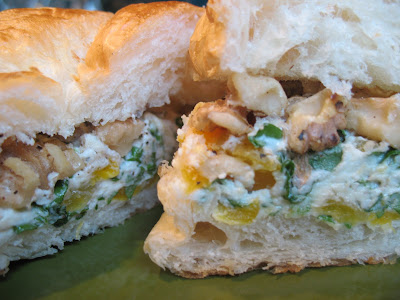 We'll see how the sandwiches go over... Tim, Chuck and I are taking them to work tomorrow.
Posted by Meg at 9:37 PM 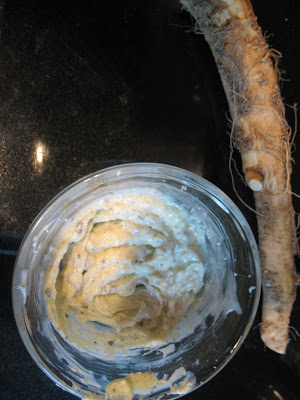 I got fresh horseradish (that hairy root above) in my CSA share this week, and wasn't totally sure what to do with it. I also had the last asparagus of the season. A quick search on epicurious.com brought this recipe for asparagus with horseradish butter. The recipe calls for drained prepared horseradish, but I just substituted my fresh horseradish , peeled and grated with the microplane. Pretty good! 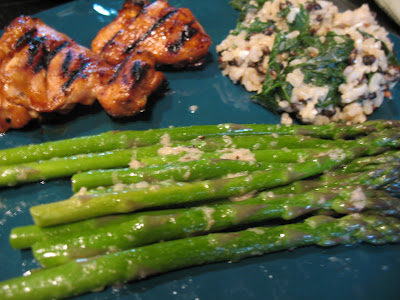 Served if with BBQ chicken thighs (followed this recipe except for the addition of some hot sauce) and Trader Joe's brown rice medley cooked in chicken broth and mixed with steamed kale and some feta cheese.

Perhaps I'll prepare the rest of the horseradish the way Simply Recipes recommends.
Posted by Meg at 9:22 PM