This past weekend, Tim, Ben, Erin and I tried to amp up the Christmas-y feeling here in Jakarta (it's a little limp... I think it's the humidity) by baking some Christmas cookies.


We made some tried and true favorites:  peanut butter blossoms (I will not tell you how much we paid for the Hershey's kisses. Ridiculous.), chocolate crinkles (I wanted to put these white chocolate/mint Hershey's kisses in these, but they were even more ridiculously expensive and I didn't buy them.), and spicy, chewy ginger cookies.
Posted by Meg at 6:59 AM 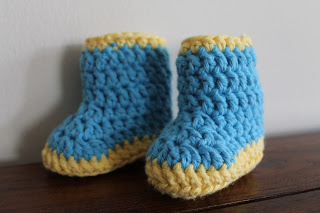 I made some more booties, this time modifying the pattern somewhat so that they would look like mini-rainboots or mini-Uggs.

Here are the modifications I made:

Remember this baby dress/toddler top?  It finally made it to the U.S.... and Miss Zoe is already rocking it out for her holiday parties!
This little Bert and Ernie number also made it to the U.S. and Mr. Andrew wears it like the dapper gent he is.


Finally, Lincoln tried on the mittens I made this week.  Here are his thoughts on them:

Zoe wrote to Santa and asked for some handmade booties and mittens... somehow the letter got lost and ended up here with me in Jakarta.


OK, no she didn't.  But her dad did email me, asking for those items on her behalf.  The Real Martha (Zoe's "GrandMartha" and thrice-a-week babysitter) then specified further, insisting that the mittens have some device to ensure that they stay on her little hands and that the booties have something similar to secure them to the baby's "cankles."  Yes, The Real Martha called the baby's chubby ankles "cankles."  She's not the only one who's had this thought about baby ankles, apparently.


In any case, I found some simple instructions for tiny baby booties and thumbless baby mittens, both with tie closures.  I whipped them up pretty quickly using Bernat Handicrafter cotton yarn.  The stitch counting was a little wonky on the booties, so I had to figure out where the center of the toe was and devise my own counting/stitch marking method.  In the end it worked out fine!  I just hope they fit Zoe's cankles.


Baby Z, expect these booties and mitten soon, but probably not before Christmas, based on my understanding of the Indonesian postal system.
Posted by Meg at 10:02 AM

I was craving homemade dessert pretty hard core this week.  I think I've read/looked at one too many Christmas cookie articles/slideshows. Seeing as Tim and I have not yet procured an oven for our Jakarta apartment, homemade baked goods were out of the question... I needed a stove-top treat.  After thinking about what ingredients I had around the house and doing some googling, I settled on pudding.  Low and behold, I was already in possession of all the necessary components for the drool-inducing caramel pudding I saw on Smitten Kitchen and then again on Joy the Baker.


Why I decided to tackle a caramel recipe when I only have bare bones kitchen equipment is beyond me.  But it ended up working out nonetheless, whisk or no whisk.  Fork to the rescue!  I was slightly concerned (read: panicked) when the caramel seized up after adding the milk, turning into a rock hard ball of sugar candy, but after some heating and coaxing it relaxed back into the milk mixture.


My only regret is that I wish I had let the sugar caramelize a little bit more before adding in the milk.  Deb called for cooking the sugar until a "deep amber" color was achieved.  I'd say mine was more like a "pale gold" when I totally chickened out and took it off the heat, making my final pudding product much lighter in color and flavor than Deb or Joy's.  But still totally delicious!
Posted by Meg at 8:16 AM

Bored?
Got empty jars?
Handy with yarn and a crochet hook?
Short on cash money?
Need a last minute gift?
Crochet jar jackets* are the answer to all of your needs. Neither time nor money intensive, these little jobbies are the perfect gift for your craft- and environment-loving friends (cough, cough... former OSW girls, you would each be the recipient of one of these babies this Christmas if we lived on the same side of the world).
Making good use of empty glass jars (jam jars, pasta sauce jars, what have you), these are super simple to pull together and have lots of uses: candle holder, pen storage, ummm... spare change jar?  Again, what have you.

Well, I took a vote, and despite low voter turn-out, the results are in:  we went with a tropical plant as our Christmas tree instead of buying and artificial tree. 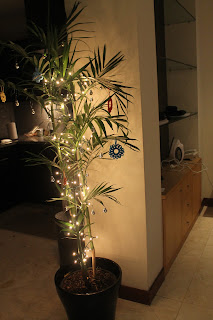 Turns out it's hard to properly wrap a palm plant with Christmas lights, and their fronds are not very supportive of ornaments.  But it gets the job done, nonetheless!  Having it up makes it feel somewhat Christmas-y.  Only somewhat because it's still 92 degrees out there...

Sorry for the delay in posting, loyal readers.  We moved into our new, more permanent apartment here in Jakarta on December 1st, and we're still ironing out the internet details.  Right now we're working with one of those 3G flashdrives that use cell service to get internet... and it's painfully slow (for example, it took over an hour to upload the two photos for this post).  We hope to have better internet in the near future, but if arranging that goes as poorly as some of our other administrative tasks here in Jakarta, it may be a while.  More on those administrative snafus coming soon at the other blog.


Anywho, we're in the new place, but we still don't have our sea shipment with furniture, cooking gear, etc., so the new joint is a little sparsely furnished.  Also, Lincoln's toys haven't arrived, either.  He was a little apprehensive when we first arrived, so I crocheted him this little mouse out of yarn scraps, in order to convince him that the new apartment was a good place to live. 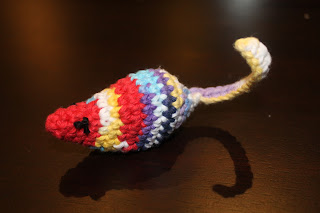 Loosely based on some mouse patterns I saw online before we moved (loosely only because we didn't have internet yet at the new place and I could only vaguely remember the patterns), this little guy only took 20 minutes or so to crochet.  I stuffed him with some cellophane wrapping so he has a crunchy noise and gave him a curly tail. 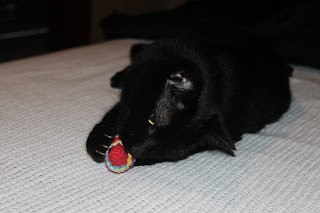 Lincoln quickly took a liking to him, but he also seems to have quickly turned his attentions to a twist tie he found in the apartment, so his taste level is suspect.
Posted by Meg at 9:34 PM