Roasted Salmon with Lime and Cilantro

Tim and I saw some salmon at our local butcher shop, and although it was clearly not local, it looked so good and so different from everything we've been eating over the past few months, so we got some. 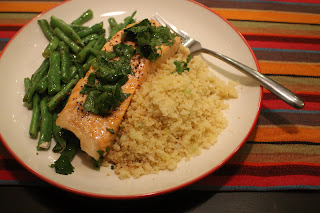 We cooked them according to this recipe from the Other Martha- roasted until super tender and moist and then topped with lime juice, cilantro and a little bit of soy sauce.  Served with a side of garlic-sauteed green beans and couscous with garlic and green onion to soak up the sauce.  Delicious! 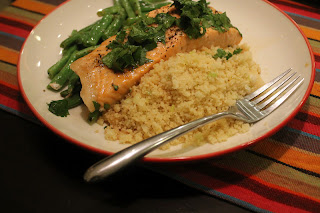 Last week Tim went on a wild work trip that took him to Bangkok, Hanoi, Phnom Penh and back to Bangkok. On his way back through Bangkok he stopped to get us bagels at BKK Bagel Bakery, as good bagels are quite hard to find here in Jakarta.  I had read about BKK last year in the Wall Street Journal right before we left DC, mentioned it to Tim, and somehow the idea stuck in his head.  I'm glad it did, because they were pretty good!

This is a really round-about way of telling you why I made these brownies:  I bought cream cheese to go with the bagels, had a bunch leftover once the bagels were gone, wanted something sweet to eat... hence cream cheese brownies. 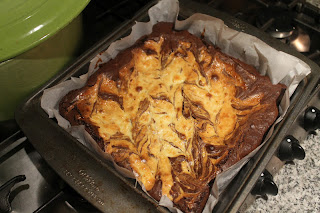 The brownies were rich and delicious.  So good.  My only complaint about the recipe (from the Other Martha) is that it instructs you to "whisk cream cheese with 2 tablespoons room-temperature butter."  Ummm... even at room temperature, cream cheese is not really whiskable. Creamable? Yes. Whiskable?  No.
Posted by Meg at 12:12 PM

Tim and I just bought a big wooden daybed to use as our living room couch in our apartment here in Jakarta, and although it came with a bunch of big, solid-color, silk pillows, it needed some smaller, printed pillows both for comfort and for a little bit of visual interest.  I decided to make some out of batik, of course, the national fabric of Indonesia and an official UNESCO "Intangible Cultural Heritage." 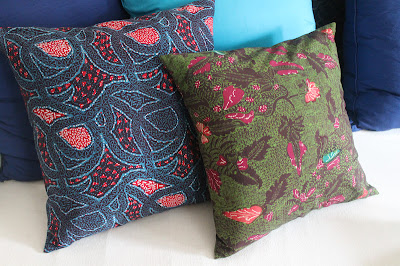 I've found places that sell batik by the yard, as opposed to already made into stuff...  the hand-made kind seems to come in 2 1/4 meter lengths (it's apparently the right length for the traditional sarong), which is enough to make a pillow cover and a Sorbetto top... win-win!! 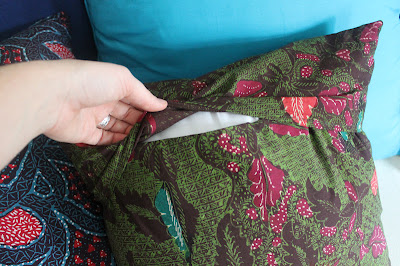 I made my pillows with an envelope-back, using this tutorial. Ridiculously easy.  So easy that I am tempted to make a whole bunch of different batik covers and switch them out regularly.  This could get dangerous.
Posted by Meg at 6:31 AM

Ok, so after my last beef rendang attempt and failure, I felt I needed to redeem myself.  If at first you don't succeed, yada yada...  this time I tried using this recipe from Rasa Malaysia (yeah, I know, Malaysia is not Indonesia, but the author claims to be using an Indonesian recipe). It looked more promising than the last recipe I tried- it involves a paste made from all of the aromatics, plus additional spices (which are so cheap here! hooray for the spice islands!), but most importantly, the recipe had more detailed instructions. 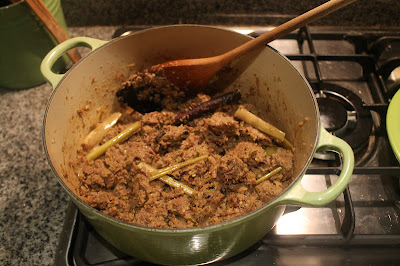 Well, I gave it ye olde college try, but the recipe was still not successful.  Sigh. Fail. Maybe closer than the last try, but not quite right.  While the flavor is nice and it smells amazing, I can't seem to achieve the deep, dark caramelization that they get at restaurants here.  Tim says that I can buy pre-darkened coconut milk here, but that seems a little bit like cheating and none of the recipes I've seen online include it. 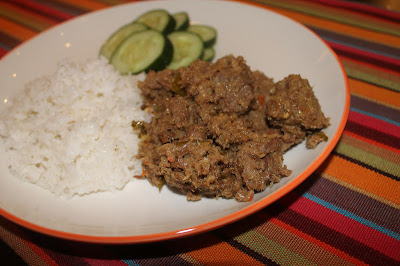 Perhaps I need to take a cooking class here and have someone show me how to make this dish correctly.

The redeeming factor in all of this is that I made nasi goreng with the leftover rice, and it was delicious.  Nasi goreng is Indonesian fried rice, made with chilies, garlic, onion, kecap manis (a thick, sweet Indonesia soy sauce- "manis" = sweet), and usually shrimp paste (terasi udang), which stinks to holy hell, but gives the dish the umami flavor it needs. The ingredients vary slightly depending on who's making it, but the ones I listed seem to be the essential ones.  I put chicken on my rice, but you can put pretty much anything on top and call it breakfast, lunch or dinner here.  Egg, shrimp, chicken...
Posted by Meg at 9:57 PM

I am officially addicted to making the Sorbetto top.  It's foolproof. This time I made it without the center pleat to focus attention on my newly purchased hand-stamped batik fabric. 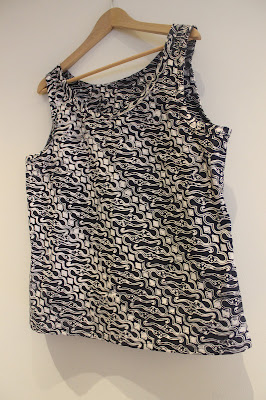 I figured the batik was pretty appropriate for wearing around town, as it's the official uniform for most Jakartans, especially on Fridays (here they have batik Fridays instead of Hawaiian shirt/casual Fridays).  The amount of batik available in the city is overwhelming... so many patterns, styles, different qualities, patterns, colors, etc.  I shouldn't complain because it is absolutely beautiful, but it's almost hard to know where to start!  This piece I used for my Sorbetto is just indigo and white, which is pretty traditional, and I am pretty sure the pattern falls into the "parang" category. 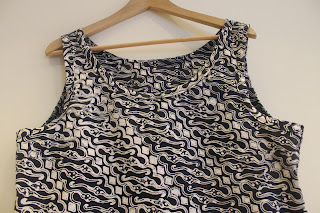 I love the simplicity of the all-batik top, but I am also really tempted to modernize it a bit by adding a contrasting edge in a super bright color like orange or fluorescent yellow or something.  We'll see.  Maybe my next Sorbetto...
Posted by Meg at 6:08 AM

After some success with my first clothes sewing project, I decided to tackle yet another downloadable pattern from the internet.  This one is a really cute, multipurpose, vintage-style pattern from the Coletterie that is free to download: the Sorbetto.   Super simple, universally flattering, work appropriate and yet cute enough to wear with jeans or shorts on the weekend, plus it's free!  How could I go wrong? 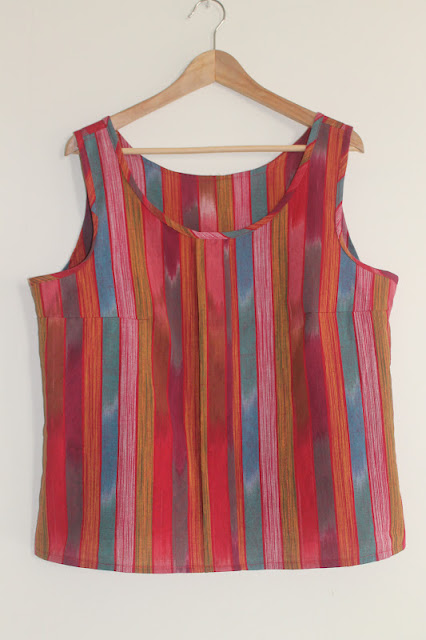 The hardest part by far with making my own bias tape to bind the neck and arms and then acttually sewing that tape on... I cannot say this was fun, but I'm glad I gave it a try.  I think it would be easier to get the tape to fold the right way if I had one of those little bias-tape maker doo-hickeys, but I used this pin-on-ironing-board method instead.  I think my main problem is that my fingers are just not dextrous enough to work with the thin, stretchy material- it was so fiddly.  Perhaps I'll improve in time, or perhaps I'll just buy pre-made bias tape instead ;-) 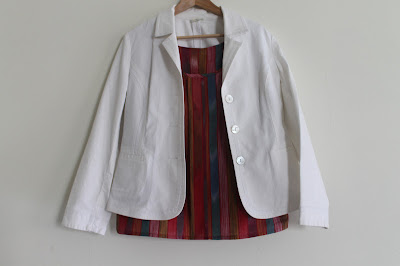 The only real changes I made was to lengthen it by about an inch and a half (I made a size 14, but used the size 18 length, plus a teeny bit more) and to top stitch the shoulder and side seams on both sides for additional strength.  I used the same fabric as this skirt I made Chuck last summer.

I think I'll definitely use this pattern again in the future.  Maybe I'll try the version with sleeves?  Maybe the plain-front version with no pleat?  So many options.  Definitely making a batik version, though.  I bought some beautiful hand stamped batik fabric that would look great as a Sorbetto top.
Posted by Meg at 2:46 AM

In the past, I have always struggled with what to order at a bar when beer isn't an option. I found myself trying something new every time, but never finding my drink, as things always seemed to sweet, too boozey or too complicated to recreate easily.

But now I've found my drink, and it's gloriously simple and refreshing: the gin rickey.


It's head-slapping straightforward with only 3 ingredients, so it can be made by any bartender at any respectable bar (and probably most unrespectable bars, too!): gin (I like Bombay Sapphire), lime juice, soda water.  It's so refreshing, especially in a warm climate like Indonesia, not too sweet (unlike gin and tonics, which I find to be simultaneously too sweet and too quinine-y), and is made from ingredients that are easy and cheap to procure (ok, well, gin is not cheap to procure here).   Also, apparently its origins are in DC, which is pretty cool.
Posted by Meg at 2:16 AM 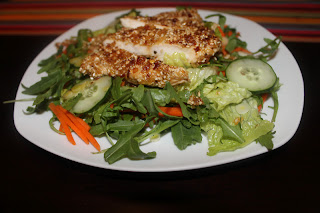 The gingery, spicy vinaigrette it split in half at the beginning and serves both as a marinade for the chicken and as a salad dressing.  The crispy sesame and panko crust on the chicken is awesome.

I added some romaine hearts to the arugula for crunch- I'm pretty sure you could use about any green for the salad.  Be sure to pound the chicken breasts flat so that they cook evenly- you don't want to accidentally burn the sesame seeds while trying to cook the fat part of the chicken breast.
Posted by Meg at 1:59 AM

With so much time on my hands, I decided that I should make an effort to do some more sewing and improve my skills a little bit.  I decided I would try some downloadable patterns from the internet- novice level ones- as my first tasks before tackling more complicated patterns.


My first dress, which I am quite proud of, is a Maria Von Trapp-esque masterpiece.  Rather than buy new fabric to make the dress, like Maria, I used fabric from old household items.  In my case, an Ikea duvet cover that used to cover the bed in the infamous "Red Room" in the Irving Street house.  The duvet cover had a large hole in it, but still had yards and yards of useable fabric, perfect for turning into clothes and whatnot.  Who knows, maybe with the remaining fabric I'll make some lederhosen for... ummm...  Kurt!  God bless Kurt!

I found the dress pattern, Anda, on Burdastyle... the dress was cute, looked fairly easy, and I loved all of the simple modifications that I saw sewers making to the pattern, particularly an obi-style belt in place of the elastic/tie waist called for in the pattern. I found these free instructions for making an easy obi and gave it a whirl using the same duvet cover fabric, lined with some felt from an old Halloween costume.  The other change I made to the pattern was to use red piping to finish the neck and armholes rather than bias tape, since I haven't found a store that sells bias tape yet here in Jakarta. 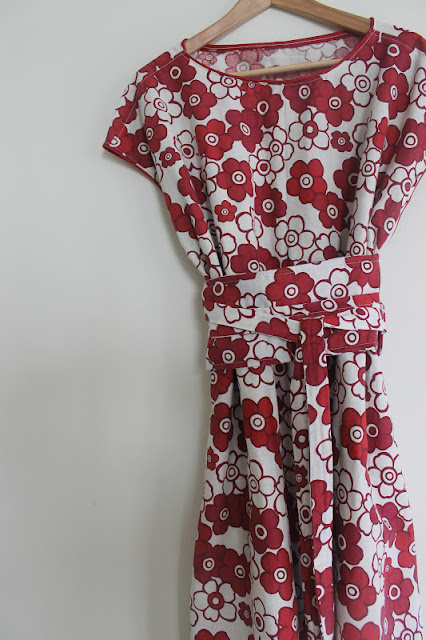 I struggled a little bit with how to sew up the ends of the piping at the seams, and found it hard to properly hem a dress on myself, but otherwise things were pretty straightforward.  Without the built-in waistband, the dress is basically a sack with arm and neckholes, but with the belt on it, it's pretty flattering, I think. I think next time I could go down a size, as it's pretty room and the armholes are a little big.

Fraulein Maria would be so proud!

I'll try to get a photo of it on me, but so far my self-portrait efforts are a failure.