Inspired by some snap peas from Star Hollow farms, some blueberries from the store and the ginormous bag of quinoa I got at Costco, I decided to make a healthy quinoa salad for lunch. Riffing on these quinoa salad recipes, I added raw blueberries and snap peas, feta, toasted almonds, minced green onions and parsley and a lemony dressing to my salad. Really easy, pretty good and definitely good for you! 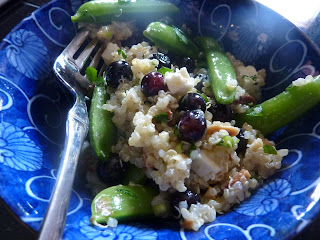 After a long day catching some Rolling Thunder and doing a little shopping at Eastern Market, we were jonesin' for some Tex-Mex food (well, I was at least), so we whipped up these tasty chicken, black bean and spinach enchiladas with a sour-creamy sauce and a tomatillo salsa. Pretty good! 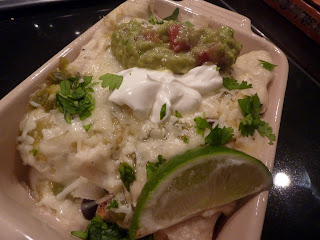 We grilled the chicken after sprinkling it with chili powder and cumin, then shredded it. I think next time I would add some of the white sauce to the interior of the enchiladas to glue them together and moisten them a bit. Otherwise, quite tasty!
Posted by Meg at 6:03 PM 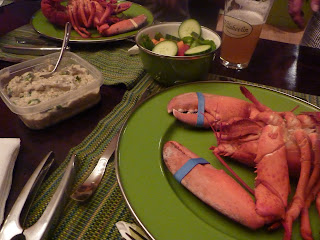 Martha brought some New England lobstahs (Massachusetts for "lobster") with her on the Amtrak from Massachusetts to DC, so we steamed 'em and served 'em up with garlic butter. Delicious!

We also had romaine salad with a homemade buttermilk blue cheese dressing... the flavor of the dressing was good, but the consistency was a little funky and chunky. Too thick for pouring onto a salad. Also, the color was a little disconcerting... please observe above in the square plastic container. Hmmm.
Posted by Meg at 5:47 PM

Got some strawberries from the CSA that needed to be used ASAP. Thought strawberry shortcake would be a good Memorial Day dessert to welcome summer... 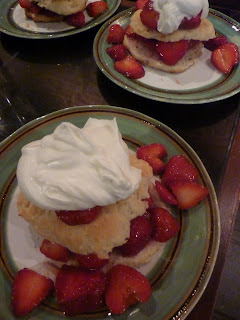 I had buttermilk in the fridge left over from the last time I made biscuits, so I thought I'd make a sweet buttermilk biscuit as the shortcake. The only change I made from this Epicurious recipe was to sprinkle some raw sugar on top of each biscuit after I brushed them with milk. I liked these biscuits for strawberry shortcake since they were tender and tasty, but for general munching, I prefer the other biscuits I've made, which have the buttery layers I look for in a biscuit.
Posted by Meg at 5:27 PM

I love me some spinach pie. And yet, until today, I'd never made it. This recipe from Closet Cooking (whose recipes I always end up clicking on on Tastespotting and Foodgawker), was simple, easy and delicious. Plus it used up many of the veggies I bought from Star Hollow Farm last week: spinach, dill, green onion, parsley. 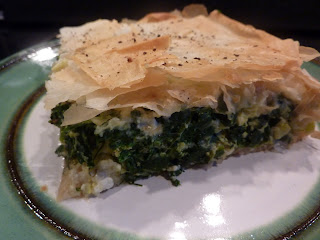 If you wanted to make some self-contained empanada-sized spanakopita, or even little appetizer sized spanakopita, I think you could easily modify the recipe- just cut the phyllo into long strips and roll tablespoons of filling up.
Served with a Greek salad with this easy red wine vinaigrette.
Posted by Meg at 8:01 PM

Sorry for the dearth of posts these days... I've been traveling across the country on several long weekend trips, sampling the local fare in Kansas City last weekend (BBQ, prime rib, locally brewed coffee, locally brewed beer), and Nashville this weekend (hopefully hot chicken, pancakes, and other tasty treats).
So, instead of my usual posting, I leave you with this website that I discovered via Daily Candy. It answers the age-old question with a randomly generated link to a fabulous recipe: What the Fuck Should I Make For Dinner?
Enjoy!
Posted by Meg at 9:09 AM

Email ThisBlogThis!Share to TwitterShare to FacebookShare to Pinterest
Labels: link, recipes, travel, what the fuck should I make for dinner

Chickpeas with Bacon and Spinach (Topped with an Egg)

So, you could probably tell from my blogging history that I have a special place in my heart for bacon, as well as quick dishes with chickpeas and greens. Also, I subscribe to the theory of "when in doubt, throw an egg on it"... Tonight these disparate loves of mine came together like magic. This dish is ridiculously easy (only 6 ingredients), has bacon, and tastes amazing with a fried egg over easy thrown on top. I think Tim would second my feelings about it, but his memory of the meal may be tainted by the fact that the Nats scored 2 homers against his Mets whilst we ate it. 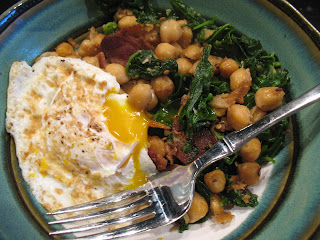 The recipe had one odd set of instructions that I took the liberty of ignoring... the recipe calls for boiling the bacon in water before browning it in the saute pan. While there is probably some specific reason for that step, I just couldn't justify the extra effort, nor could I ignore the disgusting images that flashed through my mind when I thought "Boil bacon?," which included that breakfast scene from "Better Off Dead" where the mother served slimey green boiled bacon because her husband doesn't like all the grease of fried bacon. So I just browned it in the pan, took it out and crumbled it, poured off the excess fat and carried on with the recipe. My only other suggestion regarding the bacon is that you not cook it further with the chickpeas and spinach- that only serves to make it soggy. After you cook the bacon, remove it and set it aside, then fold it in at the end. Enjoy!
Posted by Meg at 9:55 AM

Fro Yo with Rhubarb Compote and Toasted Almonds

So DC, being approximately 2-3 years behind New York and L.A. in all things cool/hip/trendy, has recently had a proliferation of tart fro-yo joints, a la Pinkberry (OMG, the song on this website is heinously bad!). I'm not complaining about the fro-yo, because I love it, but I am complaining that I had to read about how awesome Pinkberry and its brethren are for months and months before any of it hit DC. 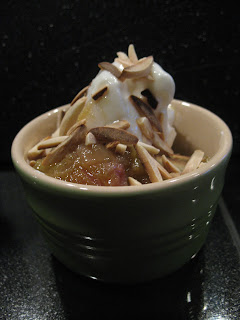 Anywho, the stuff is addictive like a mofo. Fro-yo like a mo-fo. But not cheap. However, lucky for me (and you), it's super easy to make at home. It's basically Greek yogurt (or regular yogurt, strained to thicken it up), mixed with some sugar, and thrown into the ice cream machine. This recipe is great, although I might ease up on the sugar a bit to ensure the final product is super tart.

Topped it with a simple rhubarb compote and some toasted almonds.
Posted by Meg at 8:54 PM

Fettuccine with Peas, Asparagus, and Bacon 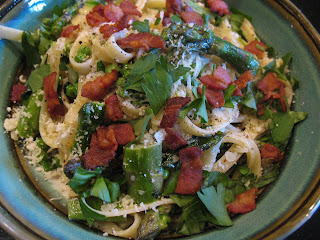 This pasta dish with peas, asparagus and bacon was the May Bon Appetit front cover... it looked great and tasted pretty good. Quite fast to make, light and springy. Mmm.
Posted by Meg at 8:43 PM

Egg and Mushroom in Ham Cups

I saw these cute little eggs in ham cups and knew I had to try them... unfortunately they didn't work out exactly like they did in the photo. 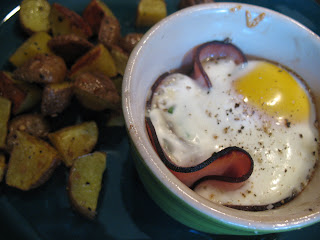 The ham I bought was a little too small and didn't quite form a full cup. The egg runneth over. Thus I couldn't remove them from the cups so they could stand on their own. Oh well. They tasted good anyway.
I added a little bit of shredded cheddar and some chives to go with my biscuits... mmm. Served with roasted potatoes.
Posted by Meg at 8:29 PM

Mmmmm... now that I've discovered that I can successfully make homemade flaky, buttery, delicious biscuits, I want to make them all the time. But I restraint myself and try to limit it to once a month, max. 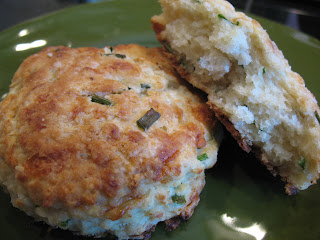 I hosted a brunch for my new "TV Club" (like a book club, but more fun and less pretentious) this morning and made these cheddar and chive buttermilk biscuits, which were a big hit. Super easy and really fabulous.
Posted by Meg at 8:21 PM

I saw this mocha meringue bark recipe being made on Claire Robinson's 5 Ingredient Fix and thought it looked easy and pretty tasty... how could it go wrong? It's got almond, chocolate chips, coffee, meringue... seems straightforward and good in theory. 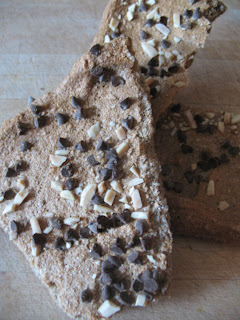 I'm not sure where it went wrong, the recipe or my methods, but it somehow tasted wrong... not very coffee-like, kinda flat and strangely textured, generally odd. No likey.
Posted by Meg at 8:13 PM

Colleen sent several of us a link to this blog that she had stumbled upon, which, at the time, had an interesting recipe front and center for a chocolate cake made with beet puree. Jenny expressed extreme distaste for and disbelief about the quality of the recipe, claiming a chocolate cake made with beets could never be good. Her exact words were "But seriously, did you notice the first recipe on that blog - chocolate beet cake -- why ruin chocolate like that! I can't believe that it would actually be good?!"

That sounded like a challenge to me! I knew it was only a matter of time before I gave it a try...
This week I found myself with 5 or 6 beets from the CSA languishing in my veggie crisper after a long winter full of root veggies, and I knew it would be a tough sell to serve them to the troops straight up. This was the perfect setting for attempting to prove Jenny wrong... 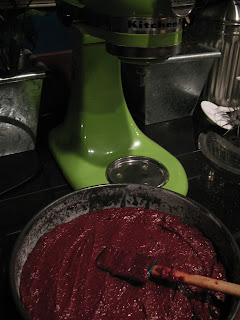 This is a pretty basic chocolate cake, with a spice cake twist from the cinnamon and nutmeg. I don't think that anyone eating the final product would have guessed that beets were in there, unless they had seen the maroon-y color of the batter prior to being baked. The beets lend a great moistness to the cake, much like adding carrots, applesauce, bananas, or some other sweet fruit or veggie to a cake or bread. Maybe it could be a little more chocolate-y for my taste, but otherwise it was really good. Jennifer suggested that perhaps a magenta beet frosting or glaze would be a nice addition. 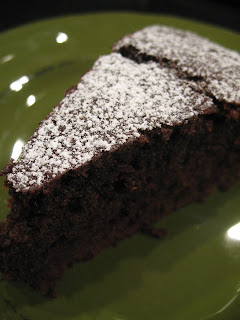 I don't think Jenny will accept the results of this experiment as valid until she gets a slice of her own, so I'll have to remake the cake next time I get together with her. Doubting Jenny, be prepared!
Posted by Meg at 11:16 AM 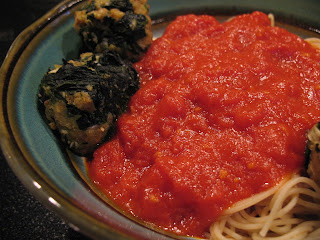 I had a ridiculous amount of CSA spinach to use up and thought making some spinach "meatballs" might be a fun change of pace. Chuck and Tim liked them, but I thought they were a little bread-y for me. But that may also have been because the recipe called for frozen spinach and I used fresh- it was hard to judge exactly how much to use.

The sauce was this super simple tomato, butter and onion sauce from Marcella Hazan that everyone on the internets has been raving about. I figured it was worth a try! Outrageously simple (cut union in half, unwrap butter, open tomato can, throw it all into a pan to simmer), yet has an addictive rich flavor.
Posted by Meg at 11:13 AM

I couldn't resist buying David Lebovitz's new cookbook, Room For Dessert, since I love both his blog and his ice cream cookbook, The Perfect Scoop. The first recipe I chose to try out was his chocolate chip cookie recipe... the internets tell me that it's as good as, if not better than the NY Times recipe from a couple years ago which is supposed to be "perfect." Both recipes recommend refrigerating the cookie dough for some time before baking the cookies. 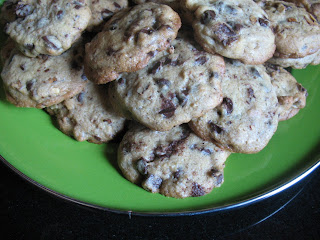 I made the cookies for a par-tay we had at the house, and didn't get a chance to taste the finished product before they were all gone (snagged by beer drinkers with the munchies), but I can say that after trying some of the dough as I mixed it up, if the finished cookies are half that good, they rock. The dough was super chunky and the toasted nuts (I used half walnuts, half pecans) gave it a rich flavor.
Can't wait to try some of the other recipes from Room for Dessert!
Posted by Meg at 4:42 PM