Sorry for the delay in posting!  It's been a crazy week full of networking/job interviews, our shipment arriving from Indonesia, an epic Ikea adventure (complete with post-purchase assembly fun), etc. 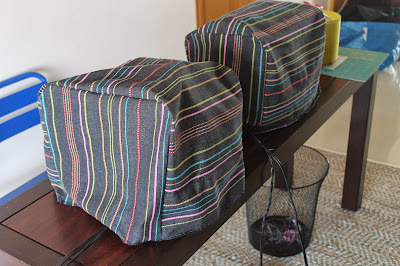 I've got my sewing area mostly set up at our new apartment in Bangkok, but I quickly realized that I really needed covers for my sewing machine and serger if I want to leave them out and ready to use.  I found the cat (who shall not be named... let's just say her name means "three" in Indonesian, and I'm pretty sure that's how many brain cells she has) had taken an interest in the thread from the serger, pulling it off the spool, dragging it across the apartment, wrapping it around the dining room table several times and once around the couch, creating a spiderweb of thread and driving me insane.  So, for her health (don't want to see her innards all tangled in thread if she ingests some of it) and mine (I don't want to even think about having to re-thread the serger... I get a headache at the just the idea), covers. 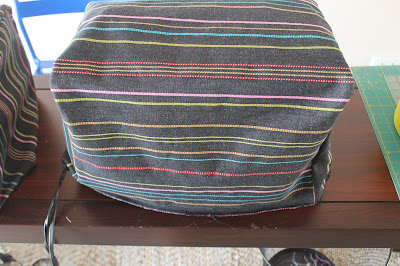 I made these quick and dirty covers loosely based on some tutorials I found online, but without all of the bells and whistles (no handles, pockets, piping or binding).  I basically cut a piece that goes up and over from back to front and sewed it to two rounded corner side pieces.  Serged the bottom hem and ta-da!  They're not masterpieces, but they get the job done (the job being keeping dust off the machines and the machines away from the cat).

The fabric is some cute striped denim that I picked up during the aforementioned Ikea adventure.  Got plenty of it to make some jumpers for the nieces, too.
Posted by Meg at 5:03 AM

I know I promised that my next piece would be my wearable muslin of By Hand London's Anna dress, and it was next in the sewing line.  In fact, it's done but for a hook and eye and some action shots.  Coming soon!

Instead I present Compagnie M's Mara blouse: a cute little round yoke blouse for the kiddos.

I made it for Zoe using some fun BelleBoo fabric I scored on Sampeng Lane here in Bangkok: polka dots with a few hearts thrown in for good measure. 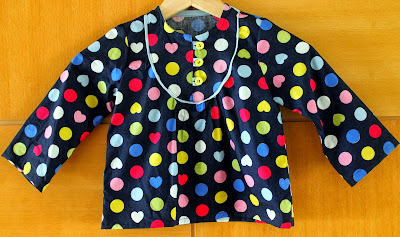 I think this pattern is really cute, although my implementation leaves a little to be desired... the pintucks got a little lost in the big print (they're right below the yoke if you can't see them) and my flat piping around the yoke is a bit of an uneven mess.  I'm not sure why I had so much trouble easing the yoke in, but I'm confident Zoe won't notice my shoddy craftsmanship. I changed up the sleeves a bit, tapering them a little at the ends rather than going for the fluffy, elasticized sleeve. 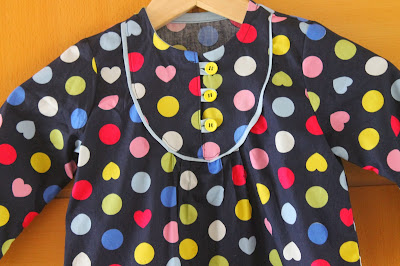 I'll definitely make another Mara blouse soon!  I am driven to improve on this one!
Posted by Meg at 1:56 AM

My Sewjo is Back

Somehow our recent move to Bangkok squashed my sewing mojo (sewjo?) a bit.  In an effort to rejuvenate it (and to justify having brought my sewing machine and part of my stash in the air shipment in lieu of something more practical like extra towels), I took myself on a fabric field trip.  The field trip seemed to do the trick because I am back in action! 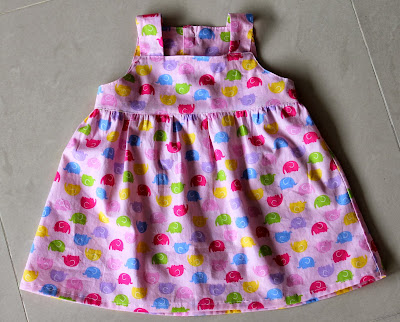 Some Googling informed me that Bangkok's main fabric shopping area is in Chinatown, on a teeny, yet packed-to-the-gills alley called Sampeng (also called Soi Wanit 1, also called something else in Thai, leading to much confusion on my part).  I followed these directions and took the MRT and a bus to get there, got a little lost (see aforementioned street name confusion), but ultimately stumbled on the fabric- and sewing paraphernalia-lover's dream (and claustrophobe's nightmare, see photos here) that is Sampeng.  Sadly, I did not take my own photos this time (I was a bit overwhelmed, dodging food carts and whatnot), but have plans to head back quite soon, photographer in tow, and will definitely post about it on my other blog when I do!  In any case, I walked away sweaty and clutching several bags full of dirt-cheap fabric. 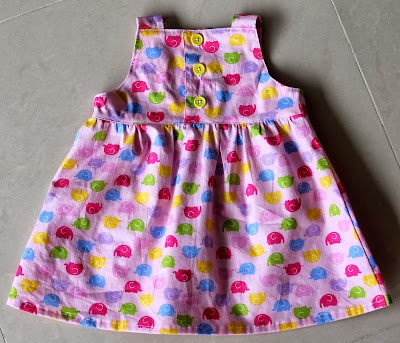 This little baby dress is made from some of the fabric procured during my Sampeng adventures and is for the cute baby of Mr. Ben and Erin (who are our neighbors again, woo!). Specifically, it's some cute elephant printed quilting weight cotton from Belleboo, which designs and prints its own fabric here in Thailand.  The pattern I used is the Summer Breeze baby dress pattern (free!) from Shwin and Shwin (designers of some other patterns I have used: Maggie Mae tunic, Rita Pants, Lucy tops), which is super easy.  Instant gratification certainly restarts the sewjo.  And the phrase "summer breeze" certainly elicits inescapable earworms.

UPDATE: Truly instant gratification... Baby Z wore the dress the next day at the beach: 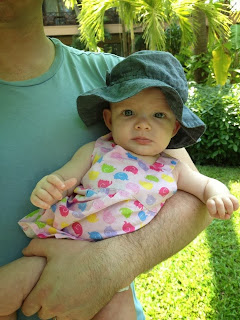 My next sewing task: a wearable muslin of By Hand London's Anna Dress.  I have already muslined (is that a word?) the bodice and it seems good to go as is, so I plan to make the whole dress from some super cheap ($1/meter!!!!) cotton blend fabric I bought on Sampeng.
Posted by Meg at 2:55 AM