The CSA is bumpin' these days, bringing tons of greens (lettuce, swiss chard, bok choy, kale), green onions, fruit (cherries, blueberries, red currants), and veggies (squash, tomatoes, green beans, peas). We have so much, I still have veggies left over from last week... the bok choy in particular needed to be used up, as well as some mushrooms.

This Emeril wonton soup recipe (Emeril doing Asian? Hmmm... well, we'll try it) called for many of the ingredients I needed to use up. Emeril didn't let us down... this recipe was really good. Making the pork wontons was somewhat time consuming, but grab a friend and create an assembly line and you'll be good. I was nervous the wontons would split open in the broth due to shoddy construction, but luckily they held up beautifully. 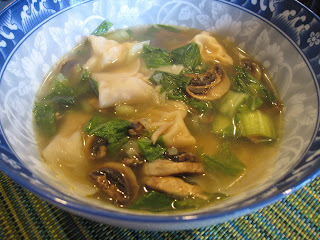 I added a squirt of Sriracha to the broth, skipped the bamboo shoots in favor of extra bok choy, and used regular white button mushrooms rather than shittake. The broth was flavorful, but delicate and aromatic- gingery and garlicky. The wonton filling was awesome- spicy, garlicky and oniony.
I would definitely make this again- it was a big hit. You could easily switch up the ingredients (used ground chicken or turkey in place of the pork, switch up the veggies)- the basic flavors are pretty delicious and flexible.
Posted by Meg at 10:48 AM

I got the first of the season's green beans from the CSA this week and needed a simple but exciting way to prepare them that didn't involve going to the grocery store... couldn't deal with the crowds after a long weekend of Chicago-style drinking and an extra long day of workin' hard for the money. 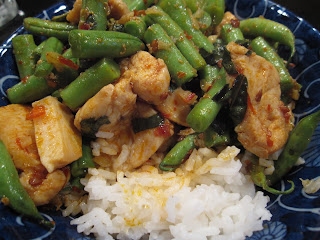 A little Googling was all it took: Thai-style stir-fried chicken and green beans with basil. The recipe I used is a simplified (only about 7 ingredients!) version of this Thai staple: gai pad krapow. Mine was heavier on the green beans (1 lb) relative to the chicken (also 1 lb). And it was spicy and delicious. Try it.
Posted by Meg at 9:04 PM 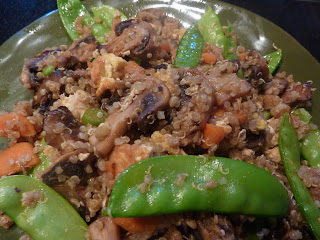 Anywho, I loosely based my fried rice fried quinoa on a bunch recipes I found online, as well as what I could dig up in the fridge, which included carrots and CSA mushrooms, green onions, snow peas and eggs. Somehow, I didn't have any soy sauce in the house (and didn't notice until I had already prepped all the veggies)... a frantic trip to Target to remedy the soy sauce disaster resulted in the purchase of $60 worth of other stuff, but no soy sauce. I think it's physically impossible to leave Target without spending at least $50.
So, instead, I threw some Maggi sauce and some Sriracha into the stir-fry, which gave it a salty, spicy kick. The quinoa acted pretty much exactly like rice, but is much healthier and more protein-rich. Give it a try!
Posted by Meg at 9:03 PM

I have been thinking about making these S'mores Brownies from Joy the Baker for months.
I love s'mores, I love brownies- what could be bad about these? 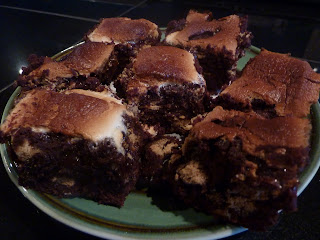 After reading some of the comments on Joy's recipe, I was a little nervous about the brownie part of her recipe, so I decided to take her general s'mores idea and combine it with my favorite (reliable, but ridiculously named) brownie, the Man Catcher brownie.
Good idea... the brownies were fudgey and delicious, with bits of graham cracker scattered throughout, topped with gooey toasted, caramelized marshmallows. Awesome.
Posted by Meg at 8:52 PM

Wow, this little rolled omelet trick from the other Martha is a potential brunch revolutionizer!

No more slaving over the stove to make individual omelets (that inevitably break or spill their filling) for your brunch guests! Instead, make one giant, flat, open-faced omelet on a lipped cookie sheet in the oven, roll it (as pictured below) into a fancy-looking spiral , and cut off however much each guest wants.... 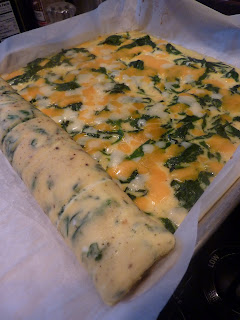 Super simple to make, serves 4, looks cool and could easily be done with any of your typical omelet ingredients. Ours was CSA spinach and cheddar cheese, but if the guests want different fillings, you could just lay the fillings out over the eggs in lengthwise stripes and cut the servings along the stripes after you roll. Awesome.
This will definitely be thrown into my easy, no-brainer dinner rotation. 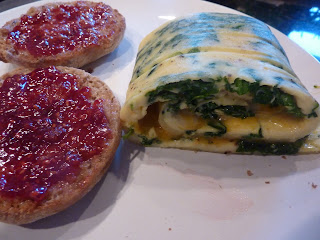