I bought Colette's Hawthorn pattern months ago during some such sale or another (because I am cheap and refuse to buy patterns full price).  Since then I have been hemming and hawing over it, worried that the style was a bit too twee for me.  However, at the same time, I have been obsessed with some of the blouse versions I have seen on ye older internets, namely this one and this one, both in polka dot fabric. 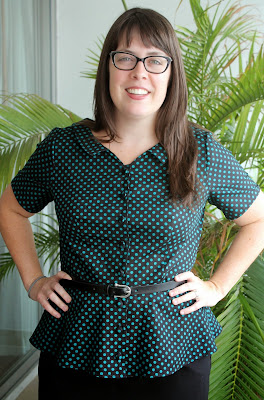 I ultimately decided that maybe I could pull off the polka dot blouse version if I found some darker colored fabric to take the girly edge off.  Luckily I scored some super cheap black and teal polka dot fabric on Bangkok's crazy Sampeng Lane.  Because of the fabric's price I didn't feel too bad treating this first version like a wearable muslin; and wearable it is! I think it came out pretty cute!  Not without faults, but cute nonetheless.  Definitely has a vintage vibe to it without being old-fashioned. 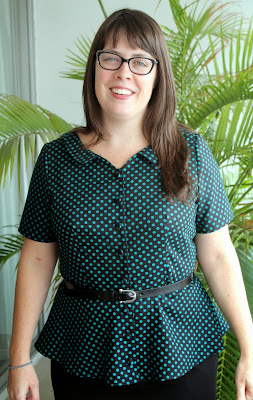 The faults: I think my collar interfacing may have been too thick because I cannot get get it to lay flat... I've heard others had this problem, too, so maybe it's not just me.  I sewed it down at the shoulder seams, but may have to sew the corners down, too.  Also, the waist is bit messed up- somehow my button placement is off or my hook and eye insertion is faulty (or both), but there is a big ugly gap at the waist, so the top can't be worn without a belt.  The nips may be a wee bit pointy, too. 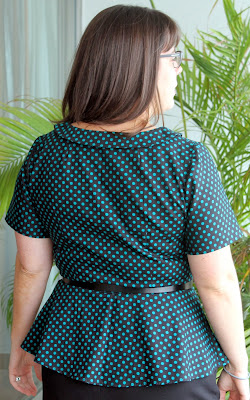 I skipped the sleeve bands out of laziness and just serged and folded up the hem to maximize length, but otherwise followed the pattern.  I made covered buttons for the first time using a kit I got at the Japanese dollar store here in Bangkok (might be my new favorite store)- fun stuff.

I think next time I'd like to play with a lower neckline- a deeper V.  Not sure how to go about that, but I'll figure it out! 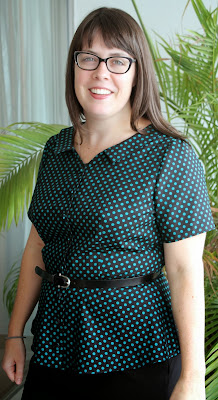 Another Sew Fab bundle pattern whipped up in about an hour: the Too Sweets "Best Harem Pants."


I dunno why I waited so many months before sewing up some of these patterns, but now that it's gift-making time, it's so on.  I thought the Greenpoint cardigan was fast, but this one was record-breakingly quick. 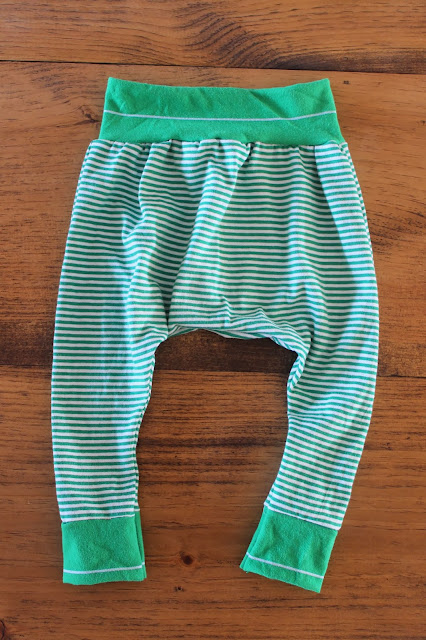 I made these guys for baby Anna.  I used the same combo of small and large green-striped fabric that I used for my Recess Raglan a few months ago (vintage knit from Martha and one of Tim's old t-shirts), barely eking out a 12-month size from the fabric scraps I had left over.  I figure since Anna has the McCarthy coloring so much more than perma-tan sister Zoe she can rock the kelly green like a natural.  Also: paired with red, they're Christmas pants, with green or orange, they're St. Patty's Day pantalones.

My second foray into homemade harem pants was equally as awesome as my first, if not more since this is a pattern for knit fabric, making it super quick to whip up on the serger.  Two thumbs up for quick and cute!  I kinda wish I had a pair for myself. 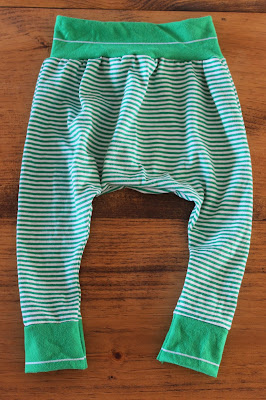 In a mad rush to make some Christmas gifts to send home with Tim when he heads back to the States next week, I whipped up this eye-searingly bright (in a good way) cardigan for Zoe: 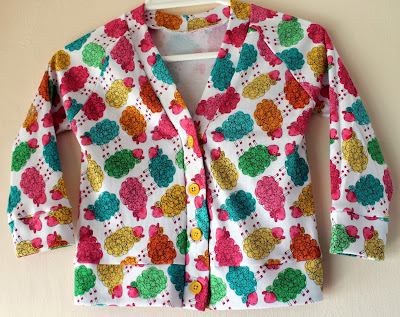 The pattern is the Greenpoint Cardigan from Hey June.  I bought it as part of the Sew Fab pattern bundle, a crazy good deal that hooked me up with 26 patterns for $30. My theory was that even if I don't end up using one or two of patterns in the bundle, I've still scored a pretty awesome deal.  I'm interested to see what patterns are in the bundle next time around!

My version of the Greenpoint Cardigan, in this technicolor sheep knit that Martha bought me from Joann Fabrics (click on the pics for a closer view of the cute little guys), doesn't quite capture the mini-hipster vibe of some of the other versions out there, but I am pretty sure it is the brightest, happiest cardigan around, hipsters be damned.  The bright yellow buttons came from a giant mixed bag o' buttons courtesy of Chatuchak weekend market here in Bangkok. 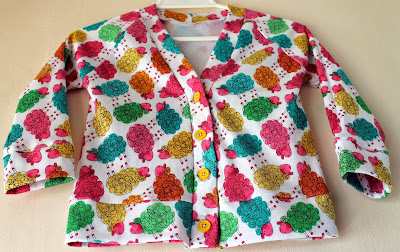 The pattern is super easy to sew up, especially with my trusty serger, still loaded up with white thread from my Weekend Getaway blouse (man, I hate changing the thread on that thing.).  A good basic cardigan pattern that comes in a ton of sizes... even if I hadn't gotten the pattern as part of the bundle I think I would have bought it anyway.  Raglan sleeves and banded hems?  Don't mind if I do.  I envision many more of these cardigans to come in the future.
Posted by Meg at 10:56 PM

Recently I realized that literally everything I have sewn for myself to date has been made from printed or patterned fabric...  with all of that pattern in my wardrobe, what I really needed was a simple white blouse.

I liked the new Weekend Getaway blouse from Liesel & Co. from the minute I saw it and only got more anxious to make it after seeing so many cute versions pop up on the interwebs. 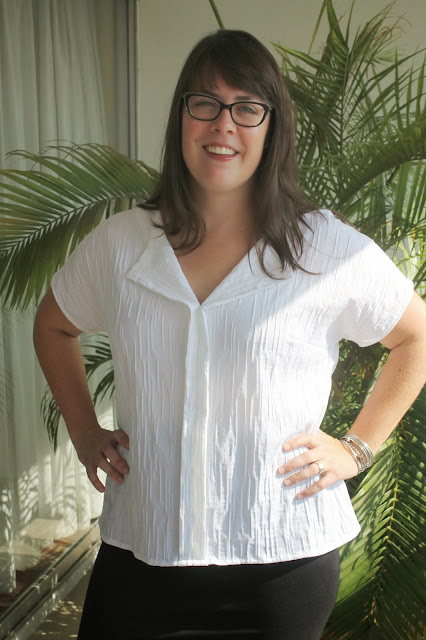 For white fabric, I wanted something light with a little bit of texture, but not something too girly like lace or eyelet.  Chuck and I found this fun textured, slightly stretchy cotton in Bangkok's Chinatown.  In retrospect, it might be juuuuuuust a little too stiff for this pattern, but really not too bad.  I had originally intended to sew the pockets on, but they were too bulky in this particular fabric, so I skipped them this time. 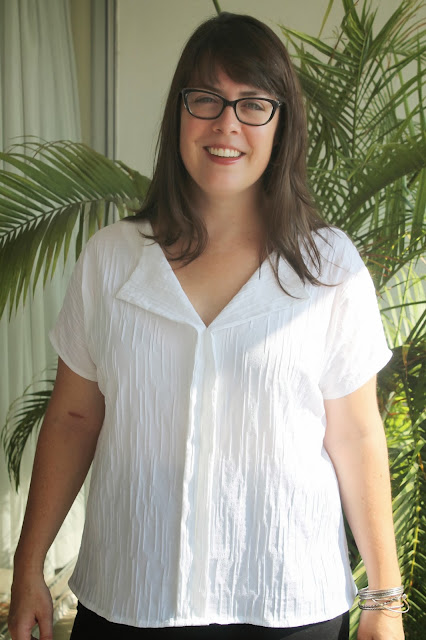 My next Weekend Getaway will be in a flowier fabric, I think, like voile or rayon challis. Now that I see the photos of myself in it, I might go down a size,too, because there is a ton of ease (also maybe due to the stretch factor in my fabric).  In fact, I might take the sides in on this one right meow.  I dig the pattern, though, so I imagine my next one will be sooner rather than later!