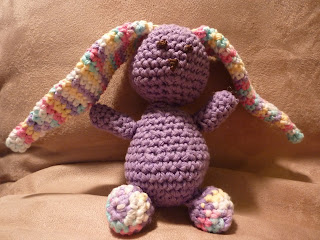 I found this pretty simple crochet bunny pattern on the Lion Brand website! I used Sugar n Cream yarn in Fleur de Lavande and Grape. The arms and legs (and tail) were a tight squeeze to make, but over all simple pattern to read and construct. 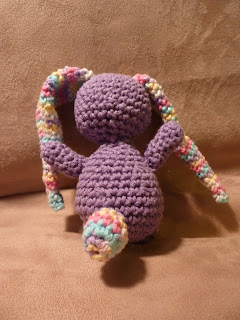 Wow, it's been a long time since I've made some jewelry.  Months and months, I believe.  Between the packing, the getting married, the moving, the waiting, etc., I've had no chance to bead.  But now that I had my crafting gear, including beads, I am inspired again.   Particularly after seeing this post on wire and bead earrings... 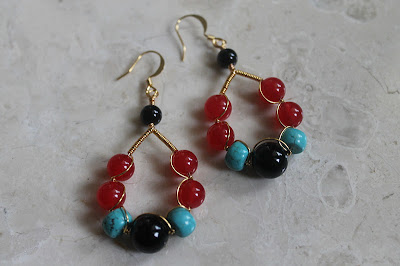 I made these earrings in a total of about 10 minutes, and was able to wear them out to a newly opened bar in our neighborhood tonight.  Finding the beads, wire and tools beforehand was a bit of an undertaking, as I hadn't opened any of my bead boxes since they arrived in my shipment.  Thanks to Chuck, Liz and Meghan, though, all the beads and findings seemed to have arrived unblemished and contained in their original location. Phew!  Thanks, ladies!!
Posted by Meg at 12:04 PM

I made marshmallows... and it was messy.

After making a couple batches of ice cream in the past week, I had about 8 egg whites lounging in the fridge, waiting to be put to good use.  I did some Googling to try to find a recipe I could make with all those egg whites that didn't involve an oven, which we are not yet in possession of....  My ice cream guru, David Lebovitz, had some suggestions which included homemade marshmallows.  Marshmallows don't require an oven, so I decided to give them a try.
Messy, very messy.  First sticky, then powdery.  Then, in my case, sticky again.


I used sheet gelatin since they didn't seem to have plain powdered gelatin at our grocery store here (despite the Indonesia's love of weird jiggly gelatin desserts).  Luckily, David's instructions included options for sheet gelatin.  I also ended up using cane syrup in place of corn syrup, which I didn't find here.
Overall, my version seemed to work out pretty well... bouncy, fluffy, light, sugary, just like marshmallows should be.  However, they were a little damp, which I think is because I got impatient when the mixture was cooling.  I should have let it go longer.  Also, apparently I am not very good at cutting a sheet into equally-sized squares.  My talents lie elsewhere.

Now we just need to see if they melt properly, because, as you well know, marshmallows are best when they're crispy on the outside and melty on the inside.  S'mores are on the menu this weekend, provided I can find graham crackers.
Posted by Meg at 11:52 AM

Ben and Erin invited us over to their place for a barbeque yesterday after Tim and Ben returned from mountain biking in Sentul City, just outside of Jakarta.  Ben made some awesome barbeque shrimp, beer boiled brats and barbeque chicken.  My contribution was an arugula salad with goat cheese, walnuts and cranberries, but more importantly, dessert. 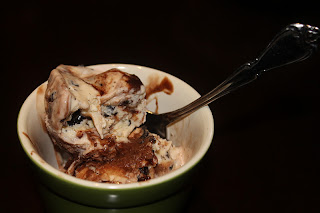 Since we still don't have an oven in our apartment, I decided to bust out my ice cream machine (plugged in via transformer, of course).  Since peanuts are so prevalent here in Indonesia (kacang in everything from satay to dessert!), I decided to make something that involved them.  Tin roof ice cream it was!

Even More Booties and Hats

This set is also for Baby Hill, for occasions in which his flashy rainbow accessories might not be appropriate... 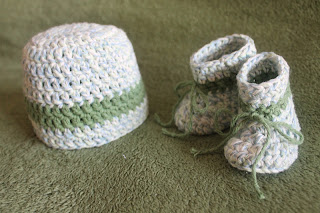 Made with Lily Sugar n' Cream yarn from the same hat and boot patterns I've been using.
Posted by Meg at 4:48 AM

Made this hat and booties combo for Baby Hill, who we just found out will be a boy (well, I made this before I knew it would be a boy, but he can still rock it out on days he's feeling sassy... I'll make him something a little bit more conservative, too.) 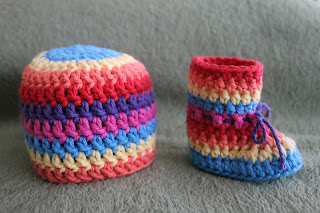 I love the look of the stripes- so cheerful and bright.  Plus, making these small stripes allows me to use up lots of scrap yarn left over from other projects. However, I can safely say that I do not enjoy the process of doing all these stripes.  It's all fun and games while I am crocheting, but at the end when it comes time to weave in the ends of the yarn, I am miserable.  Observe the absurdly large number of yarn ends I must weave it just on one little bootie:

Baby Zoe's knitted pink jumper/dress/tunic/top thing was such a success that I decided to make a blue version for her, too. 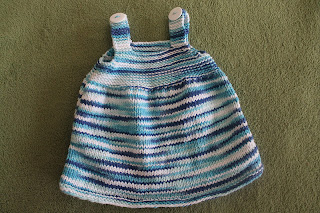 I also did a little crochet toddler top that she'll be able to wear when she's older, based on this pattern.  Super easy, seamless pattern with a cute shell-esque pattern on the skirt. 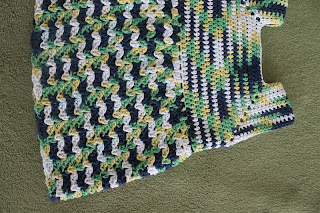 Both are done in Bernat Handicrafter Cotton yarn.
Posted by Meg at 5:30 AM

Dudes: 3 months later and our stuff is finally here in Jakarta and, more importantly, in our apartment!


After spending a few days unpacking and organizing, I have come to the conclusion that the combination of my clothes and shoes, my cooking equipment and my crafting gear constituted about 90% of our shipment.  The remaining 10% was Tim's stuff. 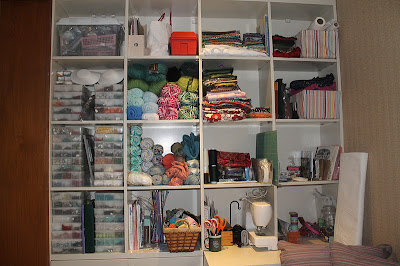 The Christmas of baby sweaters! Babies, babies, babies, so many babies. I decided to make sweaters for all the babies out there :) I used the same pattern that Meg had used earlier in the year, Everyday is a New Sweater Day. I had fun going crazy with colors, from rainbow to very Christmasy christmas colors. Check them out!

For Chloe: Kate and Dan's baby 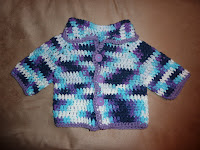 For Zoe: my lovely niece 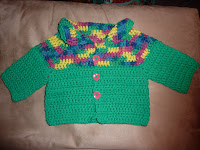 For Izzy: Kate and Kevin's baby 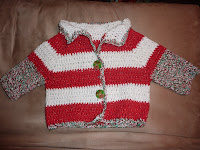 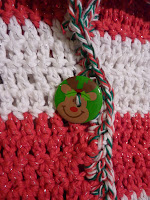 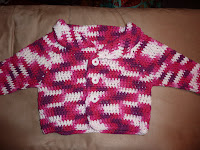 For Jack: Nora and Tommy's baby 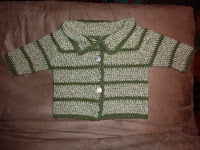 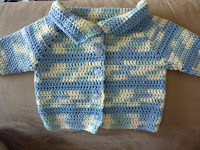