While relaxing in Ubud, Bali (where there was less praying and loving than eating), Liz, Meghan and I took a cooking course (or "culinary experience," if you will) with the Lobong family, described in detail at my other blog.  The course was pretty awesome and I think we learned a lot, but recreating the recipes at home was a bit of a challenge, as once I looked in the recipe booklet we were sent home with, things were a little bit unclear, to say the least.  I may have to volunteer my editorial services (not like my blog is a paragon of perfect writing by any means, but this cook book is really struggling in the areas of English writing and completeness).

I decided to start with what I thought might be the simplest recipe we learned, Balinese chicken satay with peanut sauce.  In the end it's not all that time consuming, with the caveat that you've made the basic Balinese spice paste, base gede, in advance.  The spice paste is not difficult, but does involve unwrapping about a million garlic cloves and shallots, as well as peeling ginger, turmeric root, and galangal (or, in this case, lesser galangal or kencur).  Luckily I had a brand new peeler from Amy for this task (THANKS, AMY!).  The spice paste recipe makes a ton, can be frozen in ice cube trays for future use, and is used in a lot of Balinese recipes. 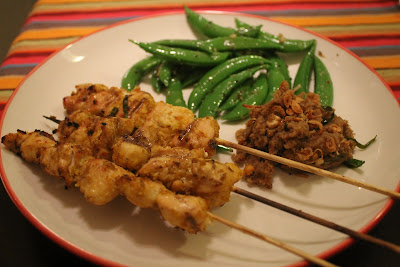 Once the spice paste is made, you basically just have to cut the chicken, toss it in some paste along with some keffir lime leaves, palm sugar and salt, marinate while you heat up the coals and then grill it.  The peanut sauce is pretty straightforward, too, although I couldn't get mine to thin out into a sauce- it was pretty thick and peanut-buttery despite all my best efforts.  I tried using my new big ole' mortar and pestle, but it was a little too much elbow work for my post-work arms, so I moved on to the food processor to finish off the peanut sauce.  Perhaps therein lies the problem. 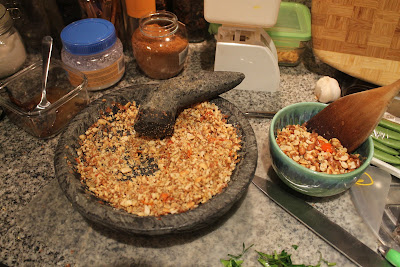 Once I hear back from Lobong on the vagaries of their written recipes, I'll post the recipes here!