I've been making these "man-catcher" brownies for several years since seeing them in the Washington Post. Despite the ridiculously goofy name, they are awesome. Super fudgy and rich. None of that cakey crap. If you want a chocolate cake, make a chocolate cake; don't make brownies.
Also, they are easy. Almost as easy as making brownies from a box, and 10 times better, so don't be intimidated.

The recipe is easily halved, which is good since it makes a massive amount. I successfully made a half recipe in a 9"x9" pan and cooked it for 30 minutes. 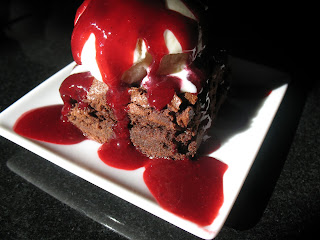 Made the sundaes for the Superbowl by topping a small brownie square (zapped briefly in the microwave to warm) with a scoop of vanilla ice cream and some blackberry coulis. Awesome.
Posted by Meg at 10:33 AM