I've been fighting off/dealing with a cold for the past couple days, so Tim and I decided chicken soup might be a tasty and comforting cure-all... 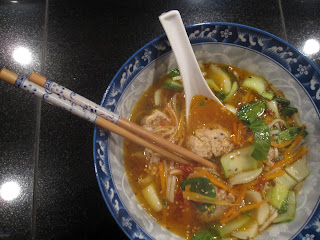 Loosely based on these 2 recipes, we ground up some boneless chicken thighs in the food processor, threw them together with ginger, scallion, cornstarch, Sriracha, sesame oil, soy sauce and garlic, and rolled them into little meatballs. Then we seared the meatballs in the soup pot to crisp them up, took them out and set them to the side. Then we threw in a bunch of chicken broth, sliced ginger, scallions, rice wine, soy sauce and Sriracha and let it cook for a while. Strained out the ginger slices, gently dropped the meatballs back in to cook for a few minutes, then threw in some coarsely chopped bok choy and julienne cut carrots at the end.
Pretty good!
Posted by Meg at 8:24 PM