Since Tim's team, the Giants, is in the Super Bowl this year, he insists on watching the big game live.  Which, here in Jakarta, means he'll be watching it Monday morning at 7 am.  Boo.

Heart-attack-on-a-plate: cream cheese + chili + cheddar, all melted together and served with chips.  An oldie, but a goodie.  In the past, canned chili has sufficed, but I couldn't find it here, so I made my own chili based on this "adult" sloppy joe recipe I've made in the past. 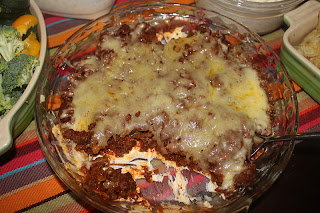 Hot spinach dip: in an attempt to incorporate some veggies into the meal, I made a hot spinach dip- cream cheese, mozzerella, spinach, garlic, onion... you'd think you couldn't go wrong.  Except it did go a little wrong: somewhat bland.  Not sure what the solution is... more salt?  Some red pepper flakes sauteed in with the garlic and onions?  It was good, however, a few days later spread on bread, topped with sauteed chicken breast and mozzarella, and grilled like a panini.

(sorry forgot to take a photo of the spinach dip!)

Ribs: Tim decided that his contribution (well, besides lots of beer) would be to try making grilled ribs.  He bought some baby back ribs from our local butcher shop, put together a dry run, marinated for 24 hours, then "smoked" them on charcoal grill using indirect heat and water for steam for about 2 hours.  Pretty good!  He thinks perhaps the grill ran a little bit hot and he could have taken them off sooner, but I thought they were pretty good for a first try at ribs! 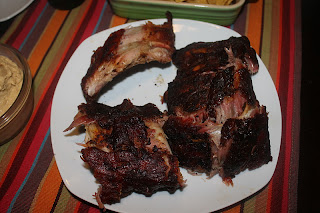 Hummus: the old In Garten stand-by hummus made an appearance, with the addition of some cumin, paprika and additional lemon juice and zest.

Buffalo bites with homemade blue cheese dip: I sorta made this recipe up a bit... I cut some boneless chicken breasts into bite-sized pieces, coated them in egg and flour, lightly pan-fried them, and then tossed them with a mixture of butter and Louisiana Wing Sauce (we are the proud owners of about a million gallons of this stuff... I wanted Frank's or Crystal, but this was the only option.  A good buy, though.)  I was hoping that the way I cooked the chicken would give the sauce something to stick to, but not get soggy.  Served 'em with a homemade blue cheese sauce, similar to this recipe, but without the dill and with the addition of a splash of Tabasco and Worcestershire sauce.  I think these were the winner for the evening... so addictive!  Definitely tasted like good old American bar food. 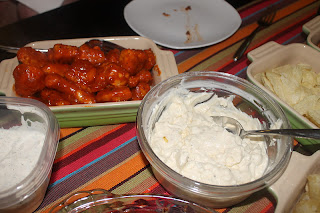 Rice Krispie treats:  I had big plans to make S'mores with my homemade marshmallows, but a number of factors dashed those dreams on the rocks... 1) I couldn't find graham crackers at the store (I saw them around Christmastime and am now kicking myself for not buying a box or two.) and 2) in a trial run, the marshmallows didn't toast correctly- too wet and melty.  Sigh.  Fail.  I blame it on the humidity.  Rainy season is a bitch.  Rice Krisipie treats were a good back-up, though.
Posted by Meg at 10:50 PM