Omg.  This salad is so good.  Even Tim liked it, lamenting the lack of meat only somewhat, stating that, "maybe it would make a really good side... you know... to some meat."  I liked it on its own, but agree that it would also make a kick-ass side dish and/or bed for some Vietnamese-style grilled chicken (we made a recipe quite similar to this one at our Hoi An cooking class in June.) 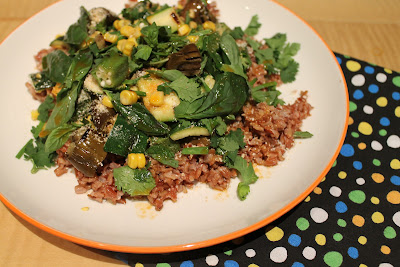 I had lots of fresh herbs left over from our Vietnamese pomelo salad last week and saw this herb-heavy, Vietnamese-esque recipe in my July 2012 Bon Appetit magazine... I am so glad I made it.  It's got a lot of ingredients, but don't be intimidated, as it's really quite easy once you light up the grill and is a great way to utilize all your summer veggies and herbs- corn, eggplant, zucchini, okra, mint, basil, cilantro.  Mmm. 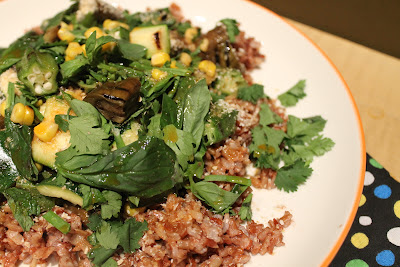 I made only a couple small changes to the recipe- the dressing is supposed to have grilled Holland or Anaheim chilis, but here there are just cabe rawit (the little ones) and cabe besar (the big ones).  All are blow-your-face off hot and not really the equivalent of an Anaheim.  Thus, I decided to substitute with some Sriracha to taste.  Also, rather than plain white jasmine rice, I bought some whole-grain Javanese brownish/reddish rice and cooked it coconut milk substituting for 1/3 of the liquid.  I think the hearty, nutty rice and extra coconut flavor really put the finishing touch on the recipe.
Posted by Meg at 9:23 AM