Moroccan-style Quinoa with Butternut and Chickpeas

I made a tasty vegetarian quinoa salad with Moroccan spices the other night, very loosely based on on this recipe from Closet Cooking. I liked the idea of his salad, particularly his spice mix, which I made to spec, but I used different ingredients for the salad base, according to what I had on hand.
Here's how my substitutions broke down:
In the end, the spice mix complimented these ingredients very well! 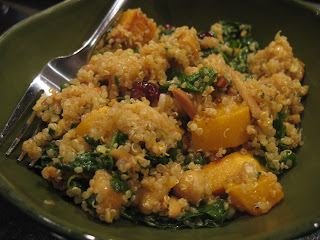