In addition to the spaghetti and meatballs I served last night, I also made crostini with fresh fava beans and arugula (along with a nice Chianti and a census taker's liver). While the fava bean spread was tasty, I'm not sure I can say that fresh favas are worth the effort... they are very labor intensive, as they need to be peeled not once, but twice. Twice! First, they come out of their long green pods, then they have to be boiled and peeled yet again to remove the waxy coating surrounding each bean. Oy. 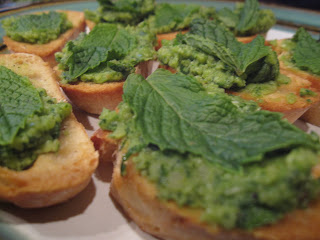 In any case, as I said, the crostini was (were?) good. Very fresh tasting, and well-complimented by the mint garnish. Mmm. Epicurious tells me that frozen edamame could replace the favas in this recipe, so if you can't get your hands on fresh favas, are too lazy to peel any favas you might find, or just can't stomach the icky Silence of the Lambs association with favas, just go for the edamame.
Posted by Meg at 10:01 PM