After cooking at cooking class all weekend, I didn't have a lot of energy to cook dinner at home, so my CSA produce has been piling up... I had approximately a thousand butternut squashes staring at me from the counter. OK, I exaggerate. There were 3. But that's a lot of butternut, yes? 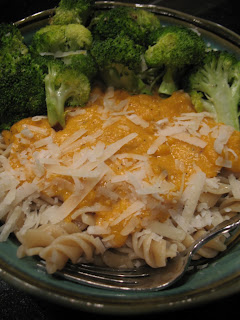 I saw this recipe for a simple butternut and parmesan pasta sauce on Simply Recipes and thought I would give it a try. It was pretty good... I made some changes, though:
- Rather than roast the squash whole, I cut it up and threw it on a cookie sheet to speed up the cooking process.
- I threw a minced clove of garlic in with the shallots because it seemed like natural addition to the recipe.
- The sauce was super thick, so I added probably 1/2 cup of chicken stock to thin it out at the end.
- I amped up the lemon juice a bit to contrast the sweetness of the squash-- added about 2 tablespoons.
- Threw some roasted broccoli on the side, which was also a good contrast to the sauce.
Posted by Meg at 8:35 PM