In a panic, I ventured into Martha's sewing (or whetever it is she does in there) room. I might was well had been on Mars. I asked Lucy what specifications she needed. My four year old responded by informing me that it had to have a soft silky edge and a tag to put her finger through. I grabbed what fabric I could and got to work.

Sewing Machine One: I tried to slide the fabrics (silky edge & nemo fabric) through effortlessly, like Martha does. It wouldn't work until my six year old informed me that there was a 'gas' pedal. Duh. After some sliding, pushing and tugging (and some 'gas'), the silky edge was adhered and I proceeded to pull the half-made blanket out of the machine. This rendered the machine busted and I had to move on to machine two.

Sewing Machine Two: This was a complete bust...I could barely get it to work.

I then decided a good ole' needle and thread would be the best intervention. I sewed on the 'tag' the old-fashioned way. She grabbed it and crashed within fifteen minutes of completion!

Well...this is what I came up with: 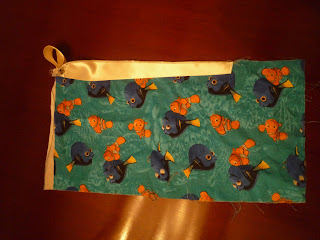