Over the past few weeks, my office has had a series of baking contest/fundraisers to benefit the Combined Federal Campaign. A few weeks ago we practiced our Thanksgiving pie-making skillz... I made a banoffee pie that got some raves, but Tony won the big prize (read: bragging rights) for his simple, but delicious key lime pie. I forgot to take photos...
This week was a cupcake contest for which I submitted two entries in a naked grab for the baking title. After consulting with Madison, I decided incorporate booze into one of my cupcakes, figuring that was a good hook with which to catch the judges. Deb from Smitten Kitchen provided the recipe I went with, and even though I skipped her whiskey ganache filling, the Guinness chocolate cupcake and Bailey's Irish Cream frosting was enough to secure the win for me!! 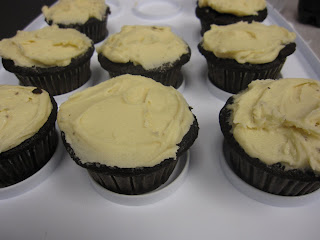 Underestimating the amount of time it takes to make 50 cupcakes (it was midnight by the time I turned the oven off!), I also made these lemon cupcakes with a lemon cream cheese frosting. Pretty delicious! I added more lemon juice and zest to the frosting as well as a little less sugar so I could keep it tart rather than sweet. 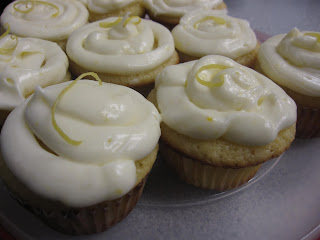