White Pizza with Kale and Pepperoni

I had some leftover pizza dough after making some broccoli and mozzarella stromboli the other night (which were good, but messy and difficult to roll up!), so we decided to make a white pizza with crispy kale. 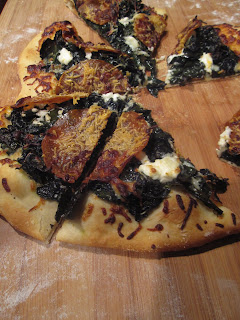 Tim insisted that we also put pepperoni on it, because he's a man and men apparently need meat. The pepperoni was good, so I shouldn't complain. We also added some red pepper flakes in with the garlic oil that was spread on the dough. The goat cheese was a tasty and unexpected addition... the tang complemented the earthy flavor of the kale and the salty pepperoni.

I broke my baking stone a while back, so I decided to try a different method for getting a crispy pizza crust: I placed the rolled out dough on an upside-down baking sheet covered in a layer of cornmeal. I think using the baking sheet upside down let the air circulate around the crust a little more- I'd definitely use this method again!
Posted by Meg at 8:12 PM