I finally got to take some photos of the outfit I made my mom for Mother's Day (and I finally got to see her since travel between Vermont and some parts of Massachusetts has eased up a bit!)... 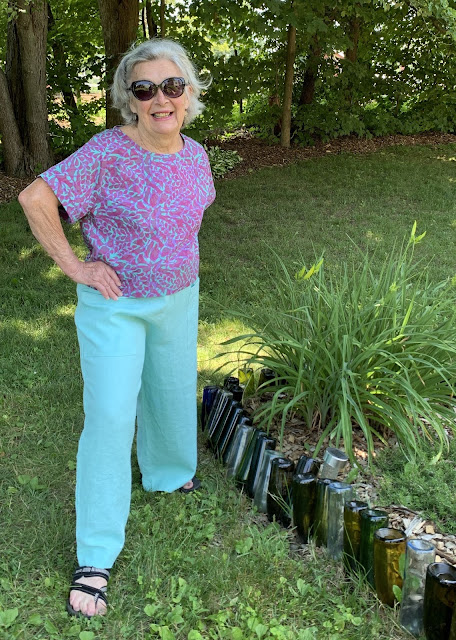 Waaaay back in late April/early May (doesn't it seem so long ago?!), I sewed up this outfit for my mom from stash fabrics: a linen blend that was originally from my mom's stash, and a pretty cotton batik that I bought in Indonesia years ago. 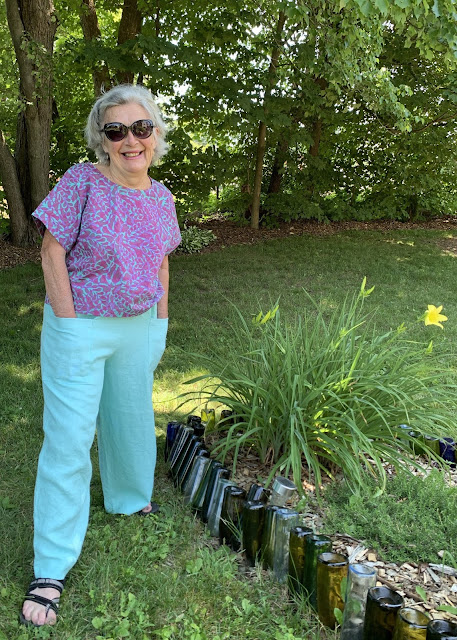 The pants pattern I used is the Seamwork Joss pattern. I really liked the pair I made and thought they might work for my mom, too.

Note: Note: I am a Seamwork Ambassador, which means I received a one-year subscription in exchange for sewing up 10 of their patterns and providing some feedback to Seamwork about their patterns, articles, etc. If you use this link, you can get a little discount if you decide to purchase from Seamwork. 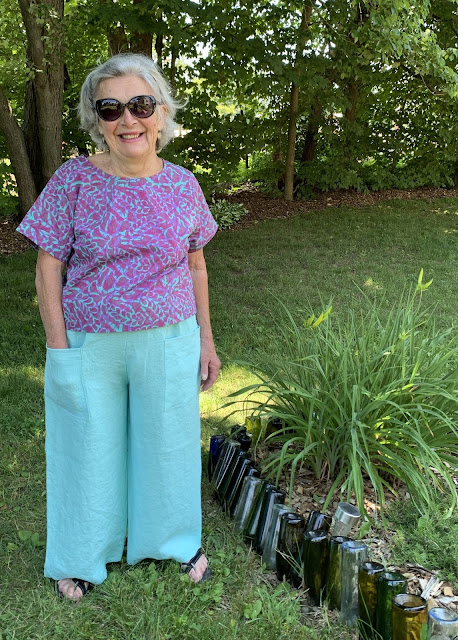 When she first tried them on, she found the rise far too high (which is a common complaint I've seen about these pants); she ended up taking the elastic out of the waistband, folding the waistband down like a facing and reinserting the elastic, losing a couple inches in rise all around. 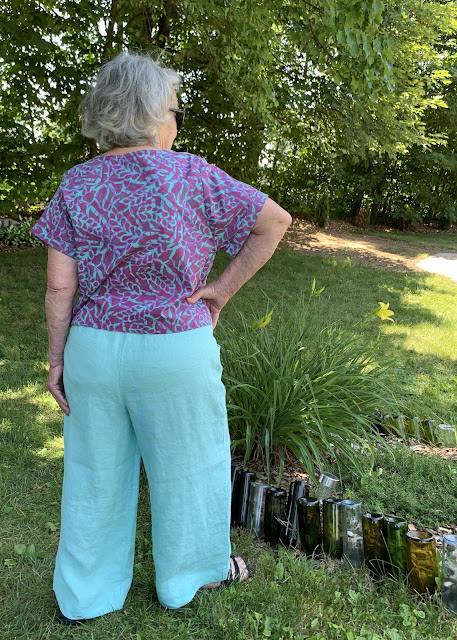 You can also see that the pants are basically full length on her - the Joss pants are meant to be cropped at the ankle, but my mom is short! 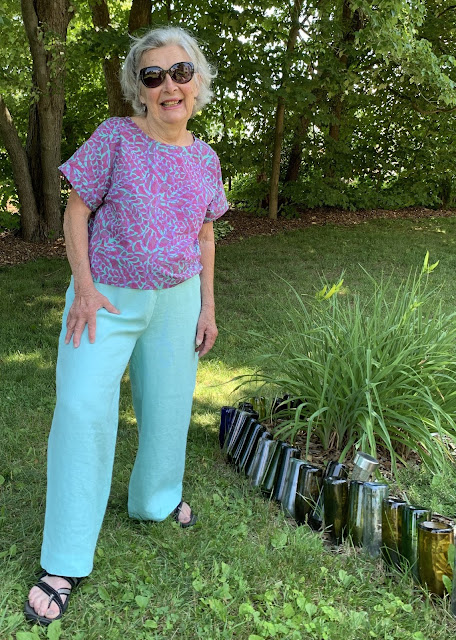 The pockets are meant to be on the front legs, but after we inspected the length of the front and back crotch curves, it became apparent that I might have sewn them on the back legs instead- ha!!

They look fine both ways, I think, but she's more comfy with the pockets in the back, so that's how she'll wear them: 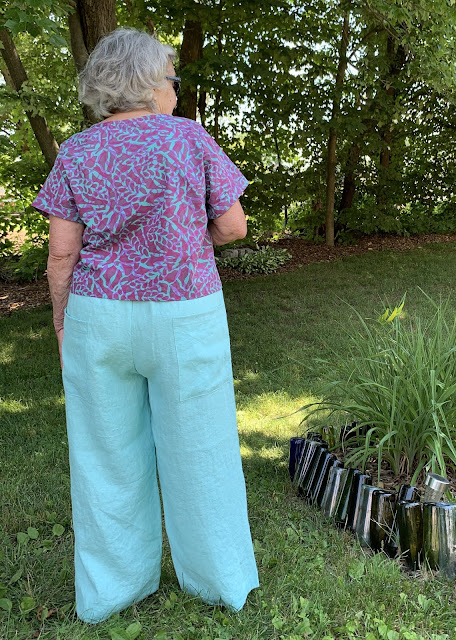 Now the top: this is the Closet Case Patterns Cielo Top. I received this pattern in exchange for testing the Pietra Pants last year, but hadn't made it yet (surprisingly, given my love of boxy tops). 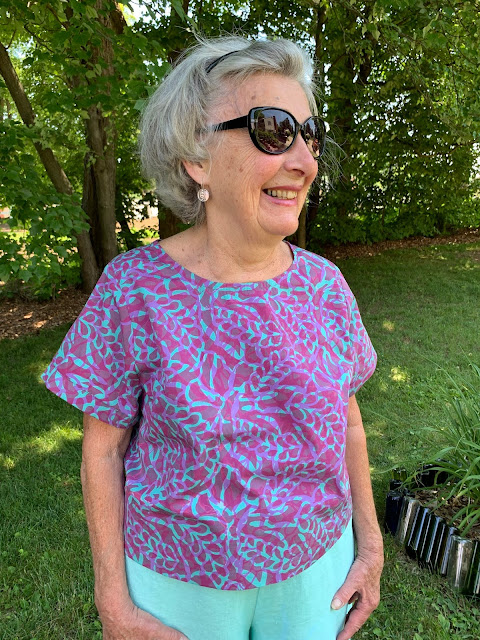 I thought my mom would like it because, while it's boxy, it's not incredibly oversized, and still has separate, rather than cut-on sleeves. 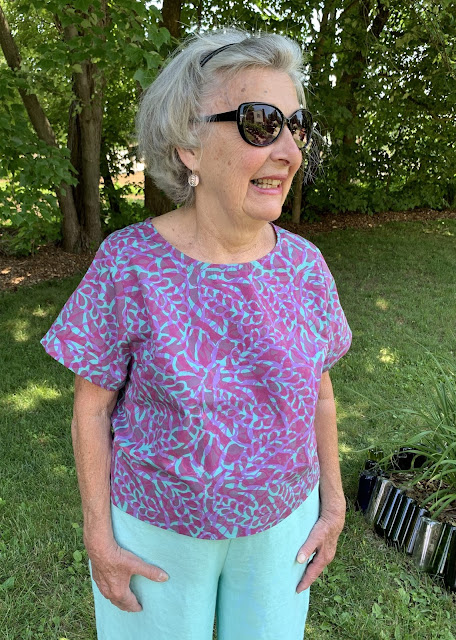 It turned out really cute! Some of the details, like the little shoulder insets on the back, are a bit lost in this print, but the fit is nice! I might have hemmed it up another inch for my shorty mom, but it works as is, too. 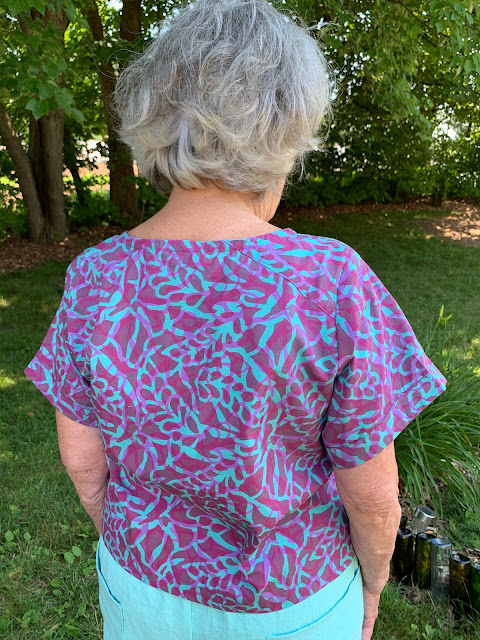 I had a flash of fear after sewing it that I'd accidentally sewn her an outfit resembling scrubs in shape and color, but seeing it on her I'm relieved. It looks cute and comfy and summery! 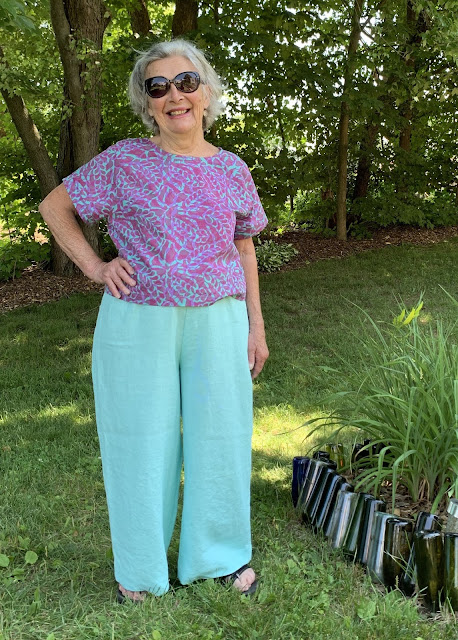