This holiday is somewhat of a non-event here in Jakarta, as you can imagine.  But Tim and I tried to celebrate in little ways.  Important ways.  Namely, hot dogs, s'mores and Budweiser.

Turns out both hot dogs and ingredients for s'mores are not the easiest thing to locate.  Sausages, yes.  But regular old American hotdogs?  Not so much.  Eventually we found something close enough, but it still was no Ballpark frank.  Oh well.

S'mores, on the other hand, were even more of a challenge.  Nary a graham cracker in sight and I ended up with some strangely shriveled, but passable Filipino marshmallows. 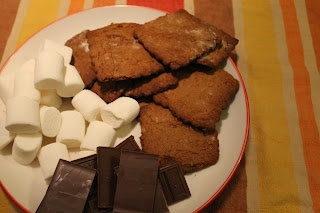 Since I couldn't find graham crackers, I decided to make my own, largely inspired by the cover of this month's Martha Stewart Living magazine.  I didn't follow her recipe because I couldn't find whole wheat flour, but instead I largely followed this recipe I found on Smitten Kitchen, substituting 1/2 cup of the AP flour with toasted wheat germ. 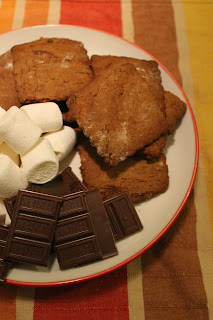 A little bit of a pain in the ass to make (have I ever explained how much I hate making rolled cookies?), but ultimately a really good honey and molasses flavor and nice texture.  My rolling and cutting (I just used a square, fluted edge cookie cutter) efforts were not the best, but I only baked about 1/3 of the dough, so I still have a chance to redeem myself. Also, I skipped the cinnamon sugar topping because that's how I like it. The crackers held up to s'more-ification better than store-bought since they weren't perforated- no cracking in half mid-bite: 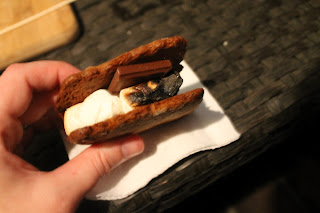