Amy told me that she wished Baby Alex had some more orange colored clothing, as it's her favorite color... In order to remedy her situation I decided to use some orange yarn I had lying around  to make Alex something.  Initially, I had planned to make this cute little contrast shoulder vest, but sadly I discovered halfway through that the 2 balls of orange yarn I had left were not from the same dye lot, a fact that was readily apparent in the inadvertent ombre look the vest had going on.  Boo.

Enter this cute brimmed beanie, which used only half of the orange yarn I had.
I added turquoise contrast stripes and skipped the flower from the original pattern.  Pretty cute!  Hopefully it fits Alex! 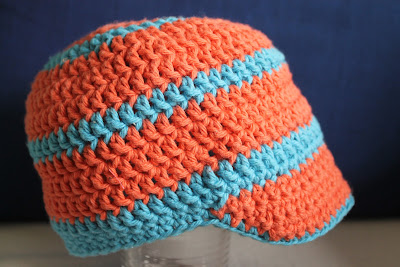 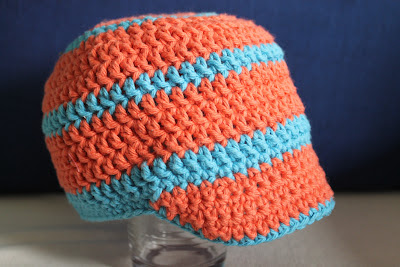