I'm pretty jazzed to share my scrapbuster Geodesic sweatshirt with you! 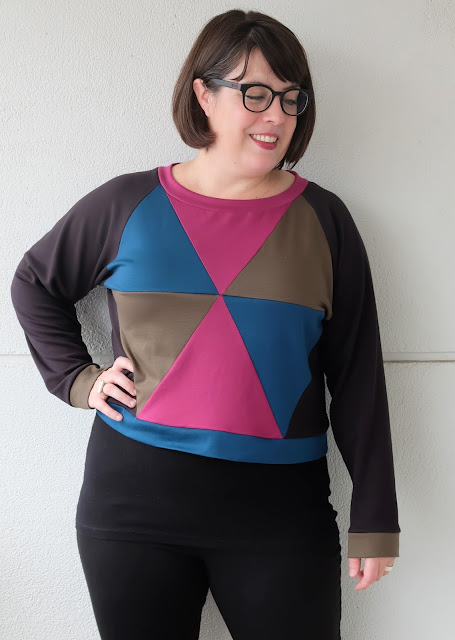 I loved the idea of this pattern from the second it was released. I bought it, printed it out, traced my size, and then... it sat there for almost a year while I agonized over fabric choice! 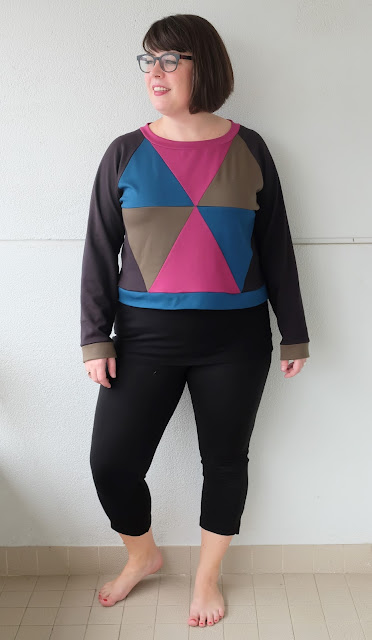 Geodesic is based on using a single equilateral triangle pattern piece to create the body of a sweatshirt, with half triangles at the sides to allow for easier alteration and to make for a more economical cutting layout. Each size is created by using differently sized triangles. The pieced nature of the pattern allows it to be made from multiple prints, patterns, colors, and textures. Whether you make it for its economy of materials or its stylishness, it’s sure to be a unique structure in the landscape of your wardrobe. 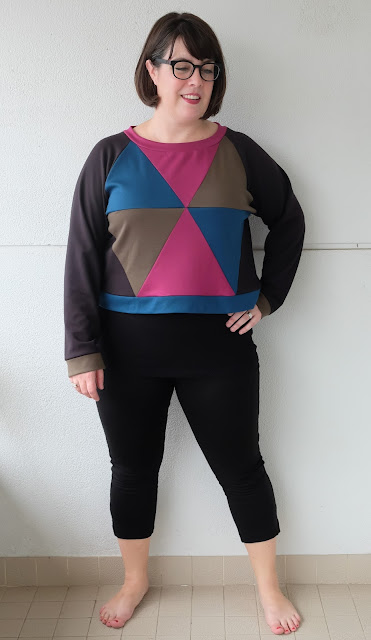 This pattern is fabulous for using up odd shaped scraps from old projects because the triangular pieces are pretty small. Mine is entirely comprised of ponte de roma scraps. I had a good deal of the black, but not full yardage, and the rest were those oddly shaped small bits you rarely use but can't bear to throw away.

Like I said, I agonized over fabric choice and color arrangement. Originally I was looking at using some of the mustard-y yellow from my Megan Nielsen Veronika skirt, but ultimately decided that the yellow was driving the top into sports uniform territory, which I did not want. 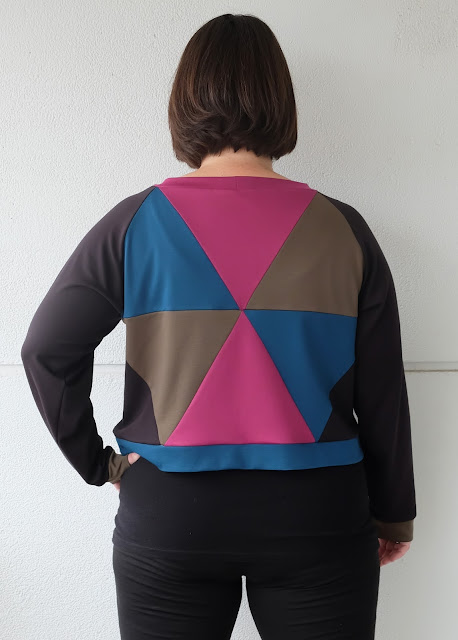 I'm really happy with the combination I ended up with, though! You'll remember the black and blue from my Tilly and the Buttons Zadie dress, the magenta from my Cashmerette Turner dress and Seamwork Astoria, and the olive green from my Named Sointu Kimono Tee. Feels good to use up those random scraps in my stash!! 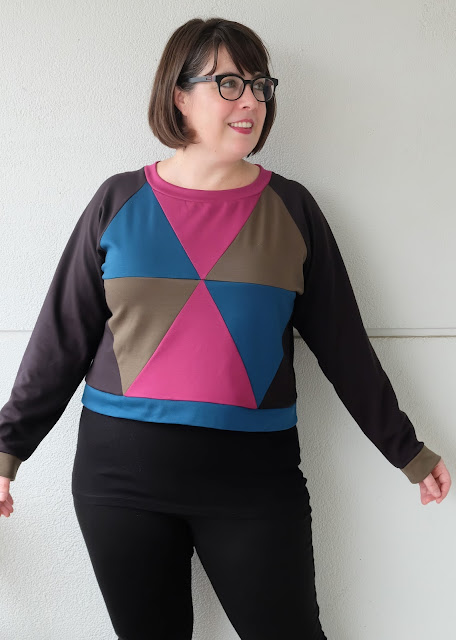 Obviously, I opted for the cropped version of the Geodesic this time. I went for a size G/H according to the size chart. I considered doing an FBA (there are great instructions in the pattern for a non-traditional FBA), but decided to go without. 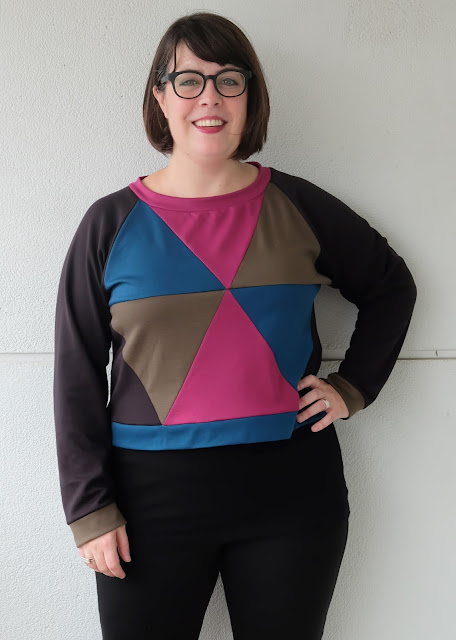 I found the sleeves to be a bit wide; I may take them in a bit under the arm. The sleeve pattern piece is the same in the front and back, and I understand why, I suppose, because the triangles at the front and back are the same, but it leads to lots of armscye shenanigans, as you can see. Probably exacerbated by the fact that I didn't do an FBA and the slinky, unforgiving ponte. 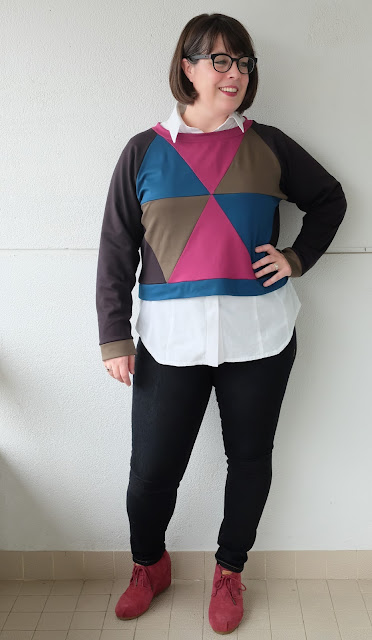 Construction-wise, turns out I am not awesome at piecing together triangles in knit fabric using a zigzag stitch. In retrospect, since this pattern doesn't rely on negative ease anywhere, I should have just used a straight stitch. My points are not as pointy as they could be! 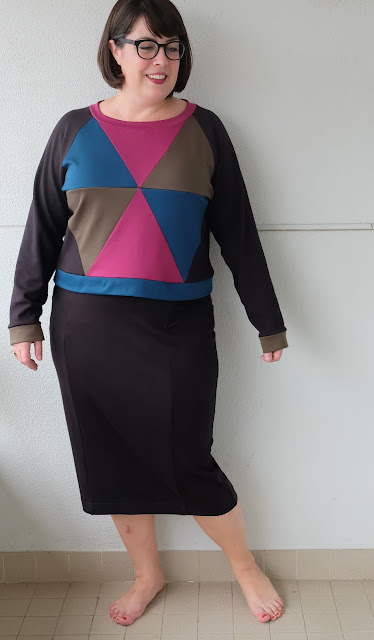 I really like this slouchy Geodesic despite my fitting issues, though! It's certainly comfy and definitely unique. Maybe I'll play around with the fit and try it in some other fabrics like french terry or sweatshirting.

The cropped Geodesic is pretty great for casual wear or a post-workout layer, with a t-shirt and yoga pants, but I think it's also pretty cute over a buttondown for a slightly more dressed up, preppy look!  Here I've paired mine with my Cashmerette Harrison and skinnified Birkin Flares: 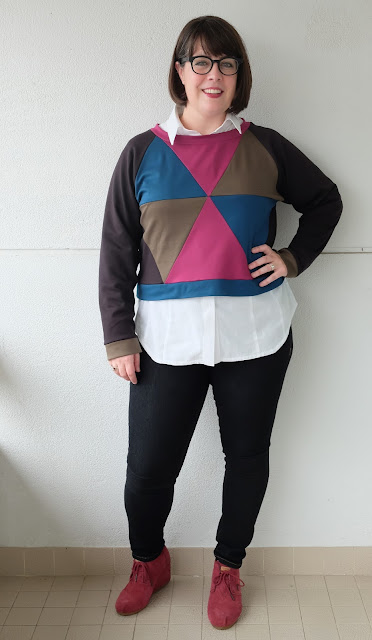 And, as Taylor has shown on her Instagram feed throughout Me Made May, it looks sleek and cool with a high-waisted skirt! Here my Geodesic with my Deer and Doe Brume skirt (for the ultimate all-ponte outfit!): 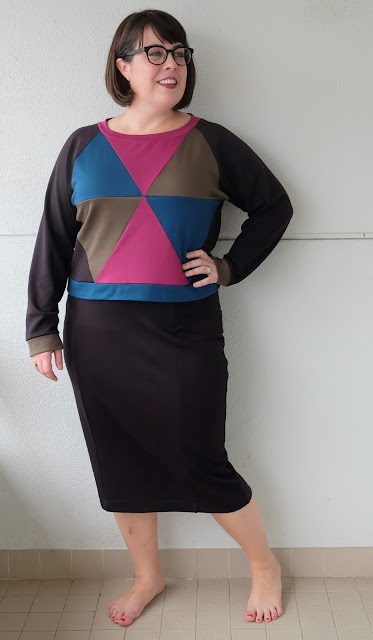