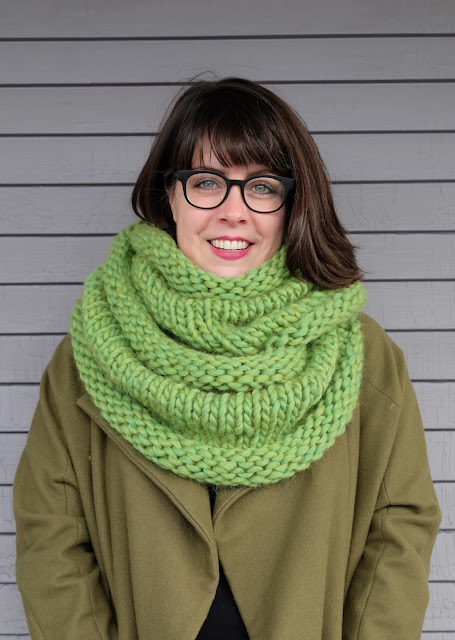 After seeing a fellow crafter making quick work of a hat using some delightfully huge yarn at Burlington's weekly craft night (6-8 pm on Tuesdays in the Local History Room at the Fletcher Free Library if you're interested!), I remembered that I had something similar in my stash! 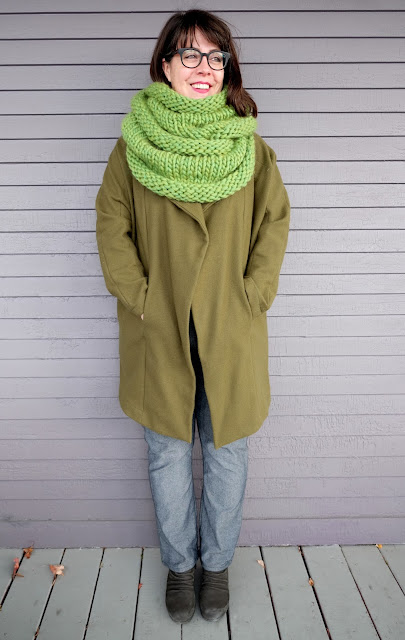 My yarn is Cascade Yarns Magnum, a super bulky/jumbo weight wool yarn in the colorway "Lime Heather," which is a lime green color with hints of teal and yellow throughout. My sister gave me two skeins of it several years back, but it wasn't until recently that it became relevant to my lifestyle again. 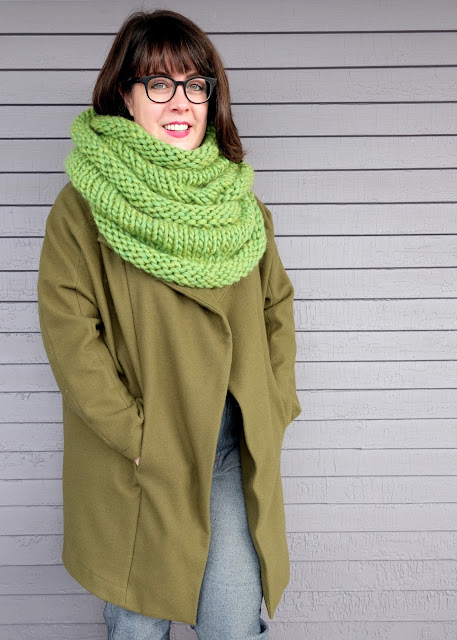 With this yarn in mind, I went on the hunt for an appropriate pattern. This massive beast is made using Purl Soho's free Mountain Cowl pattern (on Ravelry here). 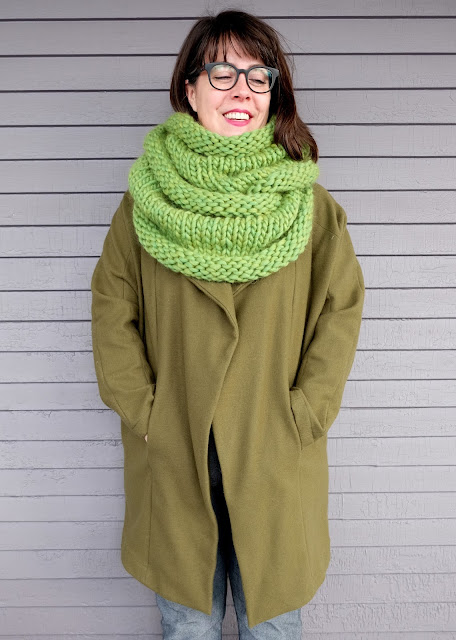 The cowl is knit in the round on 32 inch size US19/15 mm circular needles, which are almost the size of baseball bats, no joke. Between the giant needles and the giant yarn, this cowl is incredibly quick and easy to knit, which is just how I like my knitting projects. 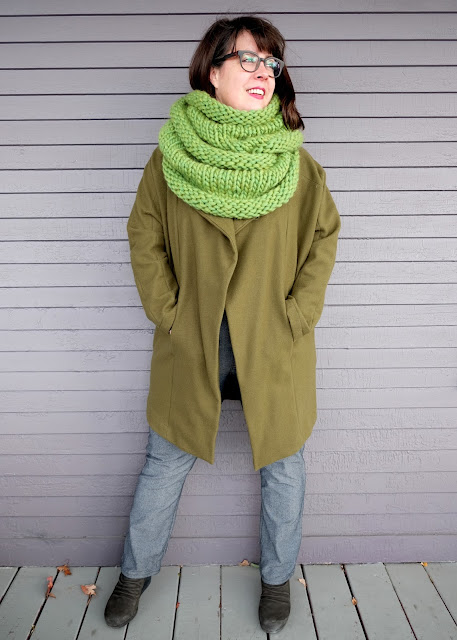 The pattern is knit in stockinette in the middle/main section, with reverse stockinette edges. It decreases in one spot as it goes up, which gives it a nice shape. 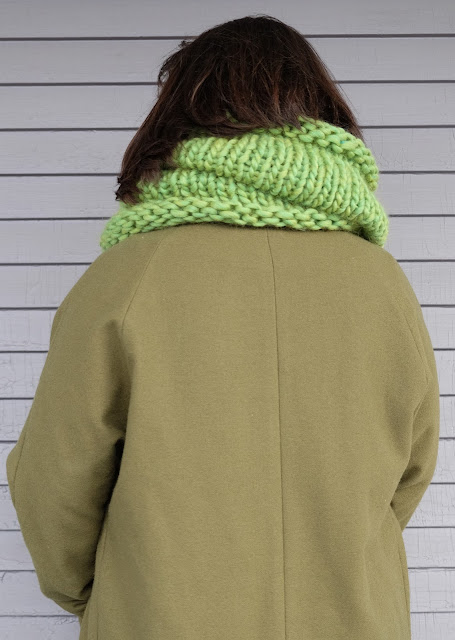 I followed the pattern for the most part, although I added a few rows here and there, mainly in the initial knit section, before the decreases started. I wanted to use up the two skeins of Magnum I had and make the cowl suuuuuper large, comically so. Mission accomplished! 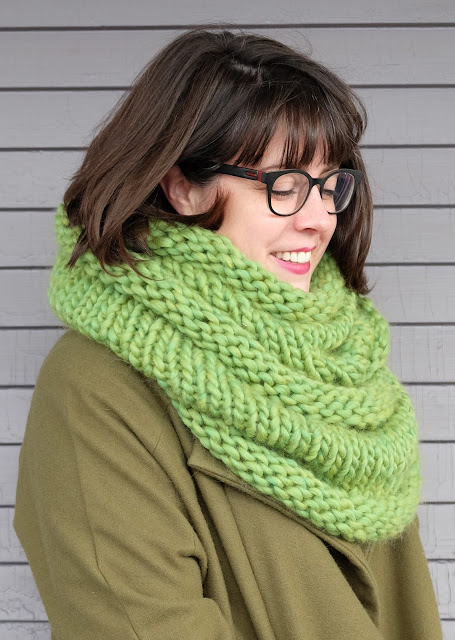 Obviously the finished measurements are bigger than the pattern would have you knit. Mine is about 68" around at the bottom edge and 17 or 18" high when the edges are unrolled. I didn't block it because I can't be bothered. You can see what it looks like unwrapped below, but I'll probably always wear it looped around my neck twice. 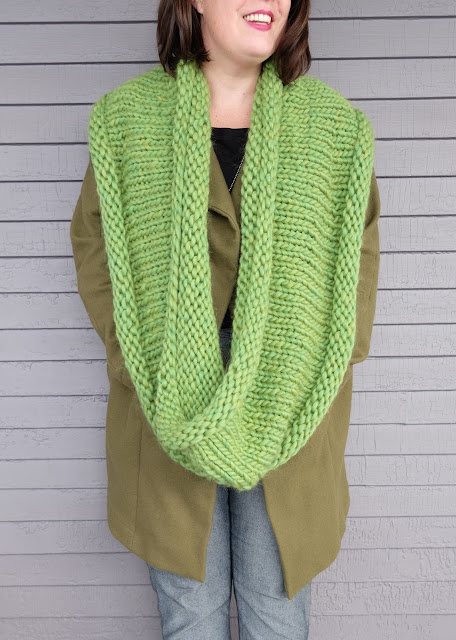 I've paired my comically large cow here with my Style Arc Riley Coat, which I love and have worn a ton this fall. It's pretty much reached its maximum usefulness as a winter coat here in Burlington, though. I may have to retire it this week for something a) lined and insulated and b) with closures. 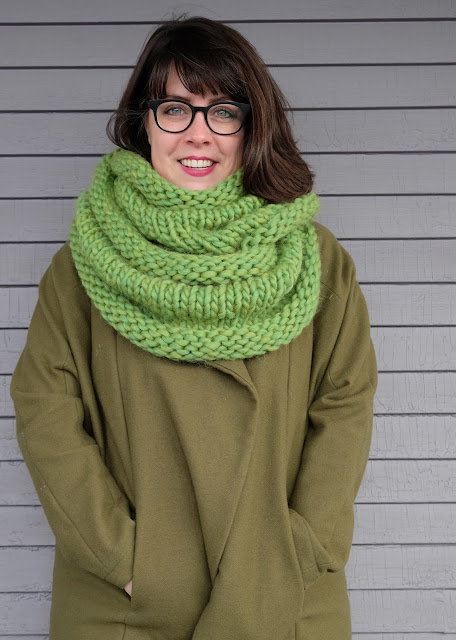 I am totally in love with this cowl! It's ridiculous, but it's also ridiculously cozy. 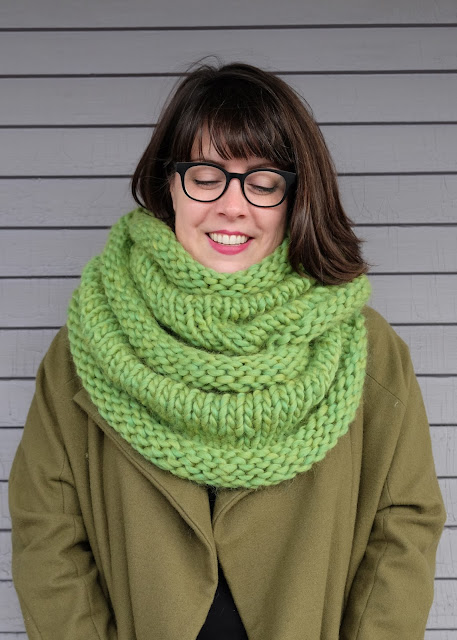